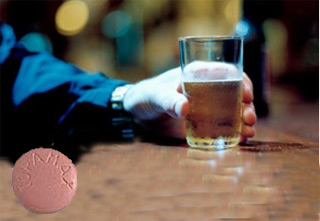 People who are dependent on alcohol and take topiramate experience fewer days of heavy drinking, a smaller number of drinks per day, as well as more days without consuming any alcohol at all, says a report in the Journal of the American Medical Association (JAMA).

Bankole A. Johnson, D.Sc., M.D., Ph.D., of the University of Virginia, Charlottesville, Va., and team carried out a fourteen-week, randomized controlled trial to find out how effective topiramate might be compared to a placebo.

The trial involved 371 males and females aged 18-65 – they had all been diagnosed with alcohol dependence. It was carried out between January 2004 and August 2006 at 17 American locations. 183 of the patients were given up to 300 mg/day of topiramate, while the other 188 received a placebo. They all also had weekly psychological sessions to encourage adherence with the study medication and treatment regime.

The following adverse events were observed with those who took topiramate: paresthesia (abnormal skin sensations), taste perversion, anorexia, and difficulty with concentration.

The authors concluded: “Our finding in this study that topiramate is a safe and consistently efficacious medication for treating alcohol dependence is scientifically and clinically important. Alcoholism ranks third and fifth on the U.S. and global burdens of disease, respectively. Discovering pharmacological agents such as topiramate that improve drinking outcomes can make a major contribution to global health. Because topiramate pharmacotherapy can be paired with a brief intervention deliverable by nonspecialist health practitioners, a next step would be to examine its efficacy in community practice settings.”