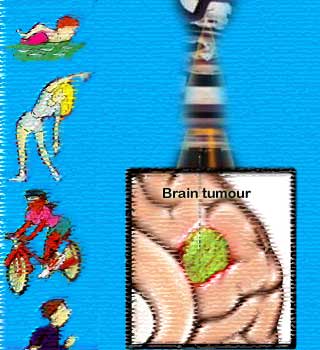 A recent research by Swedish scientists reveals that exercise may reduce the damage caused by therapeutic radiation to the brain. For the first time researchers suggest that physical activity may actually help in repairing cells that are damaged after radiation especially among kids treated for brain tumour.

Often children who undergo radiation are found to develop many learning and memory problems. In later stages this could be associated with attention deficit. A major cause for these symptoms is associated with damage due to radiation that can potentially kill both cancer cells and stem cells in the hippocampus, a region essential for proper memory function.

The research involved restoring stem cell growth and improving behavior in young mice that suffered damage to the brain induced by a clinically relevant dose of radiation. The study was the work of Dr. Andrew Naylor who had previously studied the effects of physical exercise on stem cells and associate professor Klas Blomgren who had studied the consequences of irradiation on brain cells along with Professor Georg Kuhn, a pioneer in the brain stem cell field.

Professor Georg Kuhn, remarked, “These results suggest that irradiation-induced damage in children with brain tumors could be reduced if the child under guidance is allowed to do stimulating and fun exercise.”

The group of researchers tried to create damage in the mouse brain similar to that in human cancer patients. This was done by exposing nine day old mice to a radiation dose. About half the mice were allowed to run on for long periods by free access to a running wheel, something young mice enjoy. When the mice reached 13 weeks of age, they were put up in an open space, free to explore things around them. Equipped with a number of variables to describe their moving patterns, the behaviour of these mice was then analysed.

To their surprise, the team found that increased motor activity and altered movement patterns in irradiated mice were normalized if these mice were allowed to exercise. When compared to their non-exercising counterparts, the mouse brains also contained 50% more stem cells.

This additionally enabled scientist to determine that newly formed nerve cells in an irradiated brain form fewer extensions pointing in the wrong direction, compared to a non-irradiated brain. Exercise, however was found to normalize these nerve extensions in mice.

Scientists claim that these results could also apply to children who have suffered damage due to radiotherapy of brain tumors.