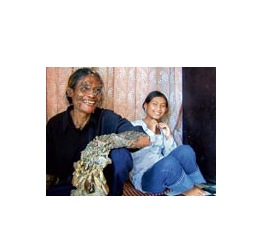 An Indonesian man named Dede has been dubbed as the “Tree Man” because he has got massive bark-like warts growing on much of his body. He may be barred from traveling to the US to receive treatment.

Interestingly, Dede was seen in a Discovery Channel documentary this month that showed his woody growths and root-like tendrils. He has not been able to work in a normal job, but is currently a member of a traveling “freak show.”

Health ministry spokeswoman Lily Sriwahyuni Sulistiyowati was quoted as saying, “We’re clear about not giving US doctors the permission to bring Deda to the US. Moreover, people like Dede, who live in small villages, don’t want to be taken away, especially to give blood samples. Normally village people don’t easily give foreigners permission to test their blood.”

Anthony Gaspari, a dermatologist from the University of Maryland examined Dede as part of the documentary. He feels that the massive growths are a combination of the human papilloma virus which causes warts and a genetic disorder that means his immune system is too weak to fight them off.

Gaspari who is from the US said that he was disappointed by the reported health ministry’s decision not allowing Dede to enter the US. However, he did say that it would not stop his initial plan to treat Dede’s condition.

Gaspari also added that he was in negotiations with a US pharmaceutical company to provide Dede with an ongoing supply of vitamin A, which would hopefully boost his immune system and hinder the growth of warts.

Possible alternative treatments, such as chemotherapy, carried higher risks and needed to be closely monitored outside of Indonesia, Gaspari said.

Genetic testing would also require fresh blood samples, which meant they would have to be taken in the United States, he added.

“I suppose at a university in Indonesia it’s maybe possible to do the testing, I just don’t know whether the expertise would be available,” he said.