The past year has undoubtedly introduced us to fruitful therapies and technologies for several ailments and conditions. 2010 witnessed a broad range of inventions that helped make life simpler as far as disease control and management is concerned. While stepping into the New Year, let us relive the astonishing investigations that kept us bewildered throughout 2010. So here are some of the newsmakers that made space in the heath terrain this past year. 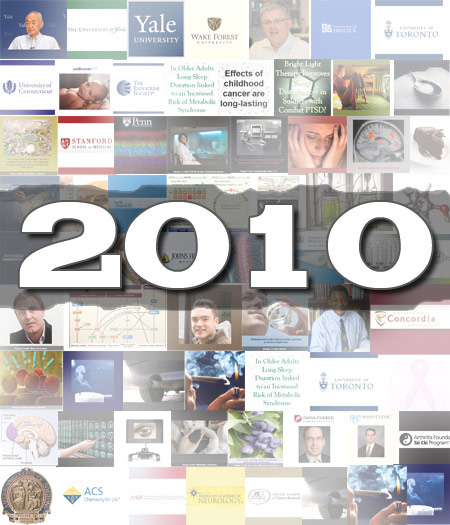 The entire month of January was occupied with novel investigations and discoveries in the health zone. It commenced with an analysis suggesting that size 0 creates a detrimental impact on bone health in later life. Also scientists shone light on mutant genes that decline flesh-eating disease in people. We were informed that smoking status correlates with erlotinib dosing in lung cancer. Researchers from the McGill’s Institute put forth a treatment for malaria, which is considered to be the world’s single largest killer of kids and pregnant women. This fascinating research was then followed by an investigation which claimed that ADHD and memory loss is similar in both humans and flies. This month also introduced us to a gene associated with schizophrenia. The gene can apparently diminish threat of developing cancer.

February was a month dedicated to highlight the outcome of acupuncture on the brain. The Yale University mentioned the importance of urine testing for pain management. After this fascinating research, we reported about an investigation linking a deadly infection to frequent cow exposure. Another reason for averting air pollution caught our attention during this month as it appears that auto exhaust thickens arteries. The Tel Aviv University also analyzed the risk of smoking cessation to cardiac health in future.

As we walked into March, the month welcomed us with a technique that apparently benefits clinicians in diagnosing cancer. A common osteoporosis drugs was then associated with reduction in breast cancer risk. Investigators also introduced a unique medication for treating menstrual cramps. The Health Center’s Dr. Leslie Wolfson and team demonstrated that alterations taking place within the brain can predict disability in older adults. The health terrain also stumbled upon BPA exposure that triggers permanent fertility defects. As we moved further, elderly patients with advanced knee arthritis received some good news. A study claimed that total knee replacement (TKR) improves balance among senior citizens.

In spite of having knowledge about the ill-effects of sugar consumption, some individuals may not be able to resist it. According to an analysis in April, increased intake of food with added sugars can raise the threat of heart disease. A global study simplified treatment for schizophrenics by linking a gene with the ailment. Even a gene variant protecting memory and thinking skills in elderly was introduced. We spotted the findings that low birth weight and type 2 diabetes share a common genetic link. Lung cancer, a disease commonly noted in smokers can be possibly avoided by metformin.

Chocoholics were welcomed into the month of May with a research that highlighted the benefits of guarding brain injury by eating dark chocolates. Also a treatment for patients suffering from inherited blindness was crafted. This amazing discovery was then followed by a research that made tooth regeneration possible. Even the impact of childhood cancer throughout life was reported. As we went on further, an interesting investigation claimed that healthy people display chronic kidney injury.

Dalai Lama had once quoted, ‘Sleep is the best meditation,’ but the month of June had something else to say. A study claimed that those sleeping for long hours face a heightened chance of developing metabolic syndrome. An investigation conducted on same lines asserted that bright light therapy overcomes sleep disturbances among soldiers with PSTD. Apart from the detrimental effects of smoking tobacco, experts observed that smokeless tobacco hampers DNA as well as vital enzymes. In a major breakthrough it was revealed that the amount of antioxidants in diet improves insulin resistance.

In addition to unlocking the secrets of longevity, July also informed us about a gene which can slow the growth of melanoma. Another research suggested moss to be a better alternative supplier of diabetes drug. As we enjoyed the shimmering rain, researchers unfolded innumerable proteins which safeguard not only the brain, but also the spinal cord. Finally we observed that childhood physical abuse augments cardiovascular events.

August was a month loaded with astonishing discoveries. A study simplified the way of reducing diet. It was asserted that drinking water prior to meals helps get rid of excess pounds. And who could have thought that blueberries are more beneficial for treating vision complications. Blueberries probably enable the aging brain to stay healthy. Also a technique to make potatoes healthier was introduced. Stepping further into this month, our attention was caught by a gene therapy that utilized venom of the deathstalker scorpion to treat brain cancer. The Yale School of Medicine informed us that weight is decided before birth in the developing brain itself. Scientists were able to ease the side effects of chemotherapy by an ancient Chinese herbal recipe.

September rolled out a mechanism that could help scientists seemingly find a potential treatment for HIV. Teens were informed that usage of TV, video and computer in excess can increase their chances of obesity. The University of Sheffield pointed out that tranquil scenes have the capability of boosting brain function. This month also unraveled the clone human virus that can treat fatal illnesses. The involvement of lithocholic acid in longevity was affirmed.

As the month of October flourished in, scientists designed a new Blink now device for reminding computer users to blink at a healthy rate. Further on we were informed that anti-obesity drugs can decrease brain activity. MIT experts believe that the collective intelligence of a group can be enhanced by the presence of women. A study also linked cannabis strain with memory impairment. The month also welcomed black rice in the battle against disease-related inflammation. Women suffering from postnatal depression were informed that antidepressants can come to their aid.

November shed light on the hypertension drug that is a promising treatment for multiple sclerosis. The benefits of performing Tai Chi were laid down by the Arthritis Foundation. Tai Chi is apparently able to ease arthritis pain, improve reach, balance and well-being. Apart from detecting 30 gene variants related to Crohn’s disease, the month also brought forward an overactive pathway benefiting Parkinson’s disease patients.

Having commenced the month of December by observing World AIDS Day, we also reported the key to gender differences in processing stress. A novel iPhone application called iCycleBeads was introduced which is a simple yet accurate tool to plan and avoid pregnancy. We even looked into an investigation that associated surgical complications with chemotherapy delay. An analysis made it clear that oil cleansing method can worsen pre-existing skin issues like acne. The Dana-Farber Cancer Institute bought into light the mechanism causing drug resistance of CLL. A groundbreaking research identified the components of pomegranate juice that can prevent cancer from spreading.

With the onset of the New Year, we wish to continue updating our readers with the best of innovations and inspections made in the health terrain. As of now we wish you a healthy and safe 2011.

Why does stress cause DNA damage?