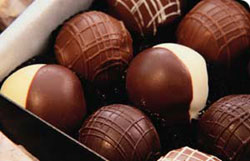 Viagra may help in increasing an individual’s sex drive, however if you want to make thinks sizzle a bit too much then chocolate is the solution to it.

Dr. Dora Akunyili, the director of Nigeria’s Federal Agency for Food and Medicine, has been on a move of advising Nigerians on Monday to give up the little, libido-boosting blue pills in favor of a measured dose of cocoa.

Dr. Akunyili’s claims were further supported by the vice-governor of one of Nigeria’s states

To support her claims — made during a meeting with the vice-governor of one of Nigeria’s states — the good doctors quoted a recently published study praising the libidinal qualities of cocoa beans.

The report, produced by Nigeria’s national committee for the development of cocoa, may be a bit insufficient on double-blind scientific tests, but it does refer to the marketing campaign of a British trade association making similar claims.

Priced at around about six US dollars (5 euros) per 100 grams, the bars are fetchingly named Sexy, Beautiful, Dreamy, Fantastic, Sensual and Lovely, according to the website foodnavigator.com.

For Akunyili, chocolate is the obvious lover’s choice. Viagra, she said, can have undesirable side effects, but chocolate is all good: it is the best anti-oxidant known and — beyond its sexual virtues — can help prevent heart attacks, hypertension and diabetes.

The vice governor, who also happens to head a committee for the promotion of chocolate, is even more excited about cocoa’s curative powers, claiming it can “cure breast cancer, get rid of chronic coughs, and enhance brain power”.

Akunyili did warn, however, that any new products containing chocolate will be thoroughly tested before going to market.