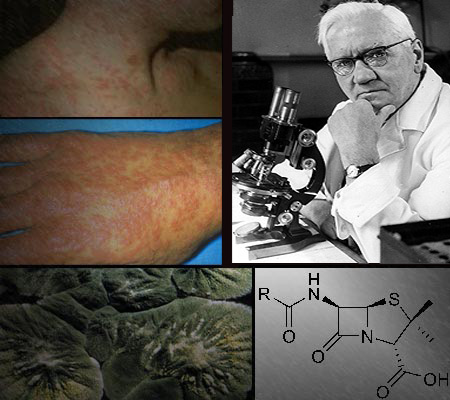 We have all learnt about how Penicillin, the wonder drug was discovered by Alexander Fleming in 1928. During the Second World War, most casualties of war were from post surgical and other infections; and not directly from trauma. Penicillin helped save millions of lives in the war.

It has been the most widely used anti-infective and many derivatives have since been developed. In fact, it was so widely used that by the 1950’s, cases of resistance were being reported.

Following up on the previous article on drug allergies, we take a look at Penicillin allergy, the most common and hence; most significant drug allergy.

Penicillin is still used to treat some cases of gram positive infections while 2nd and 3rd generation broad spectrum penicillins are used to treat a wide spectrum of infections. Its prolific use is the very reason why its resistance has also acquired such prominence. Drug allergies are not strictly hereditary, although people whose parents are allergic are more likely to be allergic themselves. What this means is you are not born allergic to the drug but may develop the allergy on exposure. Repeated exposure results in an allergic reaction which can range from an annoying rash to a life-threatening anaphylactic reaction.

Penicillins are so commonly used (including for every day cases like sore throat) that chances are you have been at one time or the other been prescribed a drug from the penicillin family such a Penicillin V, Penicillin G, Amoxycillin, Ampicillin etc.

Diagnosis, in most cases is accidental when adverse reactions are seen. Most reactions have a slow onset. However, life-threatening anaphylactic reactions develop in rare cases within an hour. Penicillin can also adsorb non-specifically to red blood cell membranes, causing immune mediated lysis. This may lead to progressive anaemia.

Living with it:
You should report to the doctor at the first signs of reaction, including your dentist. If you have a history of such reactions, be sure to mention it to the doctor. If you allergic to penicillin, it would be advisable to avoid all related antibiotics. However, your doctor may be able to give you a distantly related drug. Antibiotics completely unrelated to Penicillin are also available.

In some cases, if treatment with penicillin is absolutely essential, your doctor may recommend desensitization. During desensitization, the patient receives small but gradually increasing doses of the drug. This makes the patient’s immune system increasingly familiar with the molecule and thus avoids an allergic reaction. Because a reaction can occur at anytime during the process, desensitization is carried out in a controlled environment. Desensitization lasts only as long has the patient is taking penicillin. Once he stops and then needs to take penicillin again later, the process has to be repeated.

Penicillin in pregnancy
Women carrying Group B streptococci (GBS) run a high risk of passing it on to the fetus. For this and other risks of infection during pregnancy, penicillin is usually the first drug of choice as it is safe. However, if the mother is allergic to penicillin, serious complications may develop. Hence, alternate medicines have to be considered. The amount of penicillin that should be given during pregnancy is also a debatable issue.