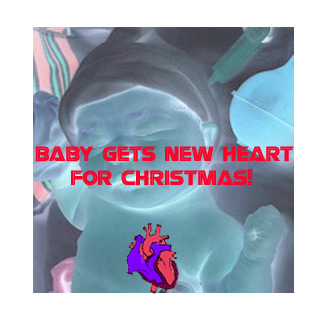 All kids eagerly wait to get Santa’s surprise gifts, but very rarely can any child get the gift of life!

3-month old Fintan Schilz from St. Charles received a new heart as a birthday gift. The 7-hours long surgery was performed at the Children’s Memorial Hospital in Chicago.

Born on September 18th at the Delnor-Community Hospital in Geneva, Fintan is the fifth child of Mark and Gina Schiltz. At birth, he was quite a healthy child, weighing 7 pounds and 2 ounces. However, in the middle of the first night, the hospital nurse observed that the newborn was having some trouble in breathing. Tests revealed that Fintan suffered from critical aortic stenosis, a valvular heart disease caused by the incomplete opening of the aortic valve. The boy’s aortic valve was blocked, and the left ventricle, a chamber in the heart that pumps blood, was damaged, causing him to have high blood pressure.

That very night he was flown that night to Children’s Memorial Hospital in Chicago.

According to a hospital spokes, it usually takes around 8-10 weeks for a heart to arrive, but Fintan was going on his 12th week by the time they got the call stating that a heart is available.

On Wednesday morning a doctor flew out to get the heart while surgeon Dr. Carl Backer began the operation, opening Fintan’s chest and getting everything ready to receive the new heart. At 2 p.m. the heart landed at Midway and was taken by helicopter to Children’s.

Along with Dr. Backer, four nurse-practitioners who specialize in transplants, along with nurses of the neonatal and pediatric intensive care units were present during the transplant.