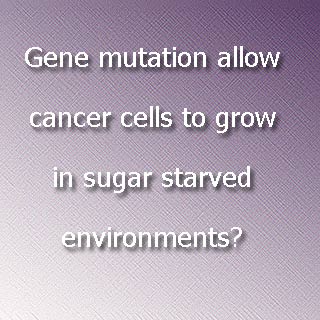 A latest research seemed to have revealed how two cancer-promoting genes may perhaps improve a tumor’s ability to grow and survive under circumstances where normal cells usually die. This research was founded by scientists from Johns Hopkins Kimmel Cancer Center.

Scientists were noted to have worked with colorectal cancer cell lines which transmit two of the most common cancer genes namely KRAS and BRAF. Further, they searched for genes which seemed to have been controlled by KRAS and BRAF which allowed cancer cells to be fit for survival.

“Cancer cells adapt to living within the inner layers of a tumor, a place where circulating nutrients are relatively scarce. We wanted to know what makes these cancer cells survive under such conditions,” says Nickolas Papadopoulos, Ph.D., associate professor at the Johns Hopkins Kimmel Cancer Center.

It was estimated that approximately half of all colon cancer patients carry KRAS mutations in their tumors. Also, an additional five percent of these patients appear to have alterations in BRAF.

It was noted that the scientists narrowed down their search to one gene called as GLUT1. Supposedly, this gene was consistently turned on at high levels in cells loaded with KRAS and BRAF mutations. Apparently, proteins which are created by GLUT1 are situated on the surface of the cell and transport glucose into cells’ interiors. It was observed that when the expression of GLUT1 gene increases, the cells produce more GLUT1 transporters and consume extra glucose.

Bert Vogelstein, M.D., director of the Ludwig Center for Cancer Genetics and Therapeutics and Clayton Professor of Oncology at the Johns Hopkins Kimmel Cancer Center, as well as investigator in the Howard Hughes Medical Institute stated that, “We think increased GLUT1 is a survival adaptation that makes cancer cells very efficient at gathering what little sugar exists in these areas.”

The findings of the experiment revealed that in the glucose-depleted surrounding, cells with KRAS/BRAF mutations seem to have much enhanced uptake of glucose in contrast to wild-type cells. However, when they knocked out the GLUT1 gene, this difference was known to have disappeared.

Subsequently, they tested whether cancer cells with KRAS/BRAF mutations would leave behind growth of cells without these mutations. For this purpose, they combined both groups of cells together and placed them in normal and low glucose environments.

Papadopoulos further stated that, “These gene mutations clearly give colon cancer cells the ability to grow in sugar-depleted environments, such as those in tumors.”

In order to determine whether this metabolic change may be utilized in treating tumors with KRAS or BRAF mutations, the team tested a novel drug called bromopyruvate. Allegedly, bromopyruvate reduces glucose metabolism.

The results illustrated that the drug appears to have blocked cancer growth in mice. Also, the drug included implanted human tumors which contained KRAS or BRAF mutations and had no toxic side effects in the mice.

Scientists claimed that this information may present novel treatments which could be able to starve cancer cells of a key nutrient known as sugar. However, they cautioned that this research does not suggest that altering dietary sugar will make any difference in the growth and development of cancer.

The research findings have been published in the journal, Science Express.