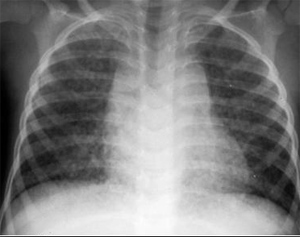 U.S. scientists have said that treating children with pneumonia at home is as safe and effective as hospital care. Pneumonia is one of the world’s leading child killers, killing 2 million children under the age of 5 each year worldwide, said researchers from Boston University School of Public Health in their report released in the Jan. 5 issue of The Lancet.

However, oral antibiotics work just as well as treating the disease with intravenous drugs at a hospital as advised by the World Health Organization, researchers said.

“Severe in pneumonia in children can be safely and successfully treated at home versus the current standard of care, which is hospitalization,” said lead researcher Dr. Donald Thea, a professor of international health at Boston University School of Public Health.

The researchers studied 2,037 children aged 3 to 59 months at seven sites in Pakistan.

About half the children received amoxicillin syrup and were sent home, and the others received intravenous antibiotics in the hospital, said the report.

Researchers found that 87 children failed to improve in the hospital by the day six of treatment, compared with 77 in the home-based group. Overall, five children died, four of them in the hospital and one at home.

Thea said he hopes that the World Health Organization (WHO) will change its guidelines for the treatment of pneumonia.

The ultimate goal of this effort is to train local health workers in developing countries to diagnose and treat pneumonia in the community, Thea said. “Hopefully, this will make major inroads and mitigate some of the deaths,” he added.