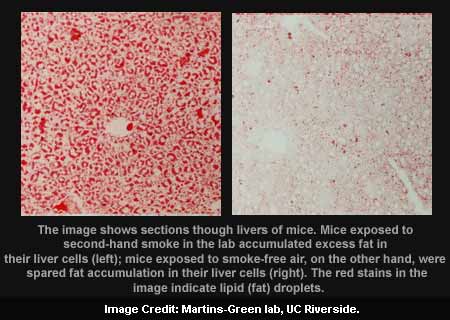 A team of scientists at the University of California, Riverside seem to have discovered that even second-hand tobacco smoke exposure could lead to nonalcoholic fatty liver disease (NAFLD).

NAFLD is known to be a common disease and increasing cause of chronic liver injury. Chronic liver injury appears to be an injury in which fat accumulates inside the liver of people who consume little or no alcohol.

In their study, scientists were noted to have focused on two essential regulators of lipid (fat) metabolism which are found in many human cells as well. These regulators namely SREBP (sterol regulatory element-binding protein) seem to stimulate synthesis of fatty acids in the liver, and AMPK (adenosine monophosphate kinase) is known to turn SREBP on and off.

Apparently, second-hand smoke is the combination of smoke exhaled by a smoker and smoke given off by the burning end of a tobacco product. Further, the smoke appears to linger in the air long after tobacco products have been extinguished which is involuntarily inhaled by nonsmokers in the surrounding area.

Second-hand smoke is believed to be a major toxicant which affects children, the elderly and nonsmokers residing in the house of adults who smoke. Many state and local governments are noted to have passed laws prohibiting smoking in public facilities. In addition, diseases associated with second-hand smoking seem to include cancer, heart disease, atherosclerosis, pneumonia, bronchitis and severe asthma.

Scientists found fat accumulated in liver cells of mice that were exposed to second-hand cigarette smoke for a year in the lab. Such fat buildup seems to be an indication of NAFLD which ultimately leads to liver dysfunction.

“Our study provides compelling experimental evidence in support of tobacco smoke exposure playing a major role in NAFLD development. Our work points to SREBP and AMPK as new molecular targets for drug therapy that can reverse NAFLD development resulting from second-hand smoke. Drugs could now be developed that stimulate AMPK activity, and thereby inhibit SREBP, leading to reduced fatty acid production in the liver,” says lead author of the study, Manuela Martins-Green, a professor of cell biology.

The findings further revealed that second-hand smoke exposure was noted to inhibit AMPK activity, which, in turn, caused an increase in activity of SREBP. When SREBP is more active, more fatty acids appear to get synthesized. Supposedly, this is due to NAFLD induced by second-hand smoke.

The study emphasized that discouraging cigarette smoking not only assists in preventing cardiovascular disease, pulmonary disease and cancer, but also liver disease.

Martins-Green further stated that, “Until our study, second-hand smoking had not been linked to NAFLD development.”

Despite the large body of scientific evidence stating the effects of passive or active smoking on the heart and lungs, reports investigating how smoking causes liver injury appear to be limited.

The findings of the study have been published in the Journal of Hepatology.

Blood protein may be linked to Alzheimer’s brain abnormalities