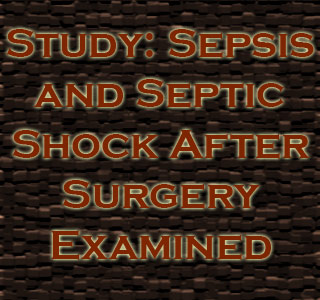 Septic shock, an infection caused due to bacteria in the bloodstream reveals a mortality rate of around 50 percent. In a recent study, scientists allege that patients undergoing general surgery register sepsis and septic shock more frequently as compared to heart attacks or pulmonary blood clots. In 30 days of going through an operation, patients may display a death rate of almost 34 percent.

Surgeons generally focus on avoiding perioperative complications in patients subjected to general surgery. Apparently prevention of venous thromboembolism is in the spotlight since the past years. Avoiding post-operative deep vein thrombosis, or blood clots in the deep veins of the pelvis or extremities, and pulmonary embolism, or blood clots that travel to the lungs, myocardial infarction called as heart attack and surgical site infections also seem to be included in preventive care. Awareness has supposedly decreased the rise of such complications. The experts explained that sepsis can cause failure of multiple organ systems and is another preventable cause of illness and death in general surgery patients.

The researchers elucidate, “Of note, septic shock occurs 10 times more frequently than myocardial infarction and has the same mortality rate; thus, it kills 10 times more people. Therefore, our level of vigilance in identifying sepsis and septic shock needs to mimic, if not surpass, our vigilance for identifying myocardial infarction and pulmonary embolism.”

The investigators said, “By identifying three major risk factors for the development of and death from sepsis and septic shock in general-surgery patients, we can heighten our awareness for sepsis and septic shock in these at-risk populations. The implementation of mandatory sepsis screening for these high-risk populations has resulted in decreased sepsis-related mortality within our institution. Further evaluation of the role of sepsis screening programs in other settings is critical and could significantly reduce sepsis-related mortality in general-surgery patients.”

It has been ascertained that sepsis, a complication significantly occurring in general surgery patients is more common than pulmonary embolism or heart attack. Risk for sepsis and septic shock may elevate due to factors like age older than 60, requirements of emergency surgery and the existence of any co-occurring illness. While the risk for sepsis seems to be heightened by six-fold, the risk of dying in 30 days rises to 22-fold.

The study is published in the July issue of Archives of Surgery, one of the JAMA/Archives journals.

No Link between Mobile Phones and Cancer: Reveals Study