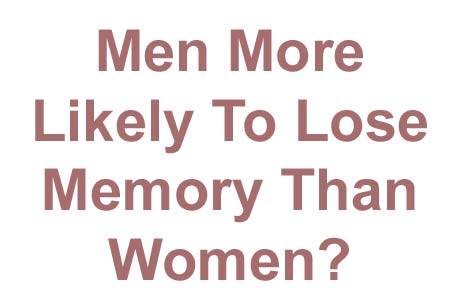 Gender differences appear to be highlighted more often in studies, the recent one talking of women experiencing more pain than men. In this study by a team at American Academy of Neurology (AAN), it came to light that men are apparently at higher risk for encountering mild cognitive impairment (MCI) or mild memory loss that takes place in the stage between normal aging and dementia, as compared to women.

In the trial, about 1,450 people in the age-group 70 to 89 and not suffering from dementia were exposed to memory tests every 15 months for a median of 3 years. They were also interviewed regarding their memory by professionals. At the conclusion of the study, approximately 296 individuals seemingly developed MCI.

“These results are surprising, given that women generally have higher rates of dementia than men. The risk of MCI in men and women combined was high in this age group of elderly persons. This is disturbing given that people are living longer, and MCI may have a large impact on health care costs if increased efforts at prevention are not used to reduce the risk,” commented study author R.O. (Rosebud) Roberts, MB ChB, MS, of the Mayo Clinic in Rochester, Minn., and a member of the American Academy of Neurology.

Another finding of the study revealed that 12% of people who were newly diagnosed with MCI every year appeared to be diagnosed at least once without MCI or cognitive normalcy at a later stage of life. However, the team put forth that the most of the people diagnosed with MCI supposedly continued to live with the same condition or develop dementia thereafter.

The report is published in the journal, Neurology.