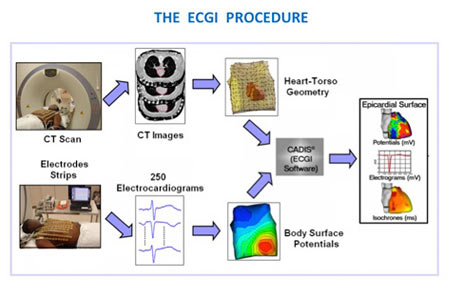 The method known as Electrocardiographic Imaging (ECGI), utilizes computerized tomography (CT) coupled with 250 electrocardiograms. These are seemingly recorded by electrodes kept on a vest over a patient’s torso to map the source and sequences of VT along with its irregularity. By accessing a unique algorithm, ECGI can create videos of the discrete VT excitation waves similar to a wake found when a stone is dropped into a pond or spinning like a tornado from markings of many heartbeats. An array of data can supposedly be attained from ECGI examination for just one heartbeat. Multiple heartbeats may reveal even more information on arrhythmia.

The study included 25 cardiology patients with VT who were made to undergo ECGI to map the working and functionality of VT in humans. The imaging apparently identified the VT origin and divided the two VT mechanisms into focal that consists of a mass of abnormal cells and the second one was the re-entry where the excitation tends to be circular. This forms a closed loop known as re-entry circuit. In each of the system, the heart’s pacemaking actions were taken away from the usual area in the sinus node. The team showed that series of abnormal excitations of VT seem to start in scar tissues that also indicate initial heart attacks.

The analysis is a major breakthrough in the treatment of arrhythmias in general. This procedure is certainly a ray of hope specifically for VT as it is non-invasive, quick and can map electrical activity on the complete heart surface on one heartbeat.

The study is published in the journal Science Translational Medicine.