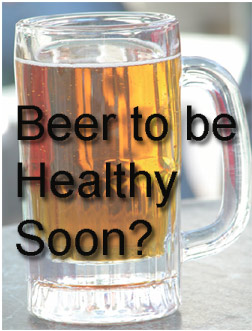 Here is some good news for those who love beer! Researchers in Germany now say that a cancer-fighting substance found in hops could be enhanced to brew a special anti-cancer beer. The discovery could lead to healthier beers and food supplements.

The preliminary studies indicate that xanthohumol, found in hops, inhibits a family of enzymes that can trigger the cancer process, as well as help the body detoxify carcinogens, according to the science newswire Ivanhoe.

Dr. Werner Back, a brewing technology expert at the Technical University of Munich said, “It’s very healthy. I think the ingredients in the beer are very good.

Xanthohumol contains more powerful antioxidants than vitamin E and some studies even indicate that it helps reduce oxidation of bad cholesterol.

“Xanthohumol has been shown to be a very active substance against cancer. It comes in small sticky beads, which you find within the hops,” says Dr. Markus Herrmann, also of Munich.

Hops have always been known to possess medicinal properties and are used in herbal medicines as a muscle relaxant. Other compounds found in hops are potent phytoestrogens. Scientists say these compounds could ultimately help prevent post-menopausal hot flashes and osteoporosis.

However, the German researchers warn that it would take 60 regular beers to equal the amount of xanthohumol researchers are able to brew in this one beer. That’s why scientists are now working on ways to give all beers higher levels of Xanthohumol, and even find ways to add it to other foods, like chocolate.