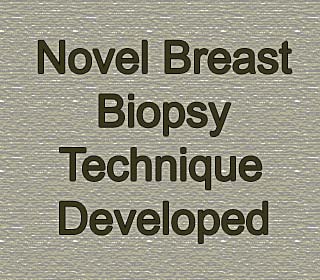 A team of experts are believed to have developed a new breast biopsy technique which may possibly decrease the death rate and discomfort faced by the patients. The technique may also reduce time spent during the treatment. This study has been carried out at the Roberts Research Institute, the University of Western Ontario and London Health Sciences Centre, London, ON, Canada.

The treatment time needed by the experienced radiologists for the freehand technique and the needle guidance system seemed to require nearly 31 seconds and 10 seconds, respectively.

“The system we designed is a prototype and is required to be redesigned for routine clinical use. Tests with human subjects are planned for the fall of 2009,” Dr. Fenster further added.

Dr Fenster has evidently also stated that the need for new techniques may be required to make the procedures more effective and also to lower variability that may be caused due to the experience of the physician and the size of the tumor. Supposedly, he further claims that for treating breast biopsy, the developed needle guidance system may be more feasible and may also help the physicians in detecting early-stage carcinomas more precisely and effectively. This may in turn decrease the death rate of such patients.

This study has been published in the American Journal of Roentgenology.