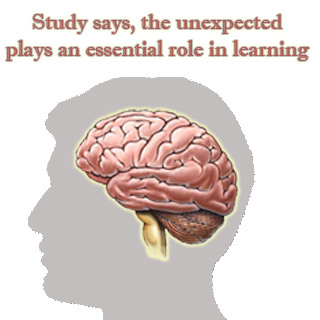 The ability to adapt and learn new behavior is a result of the human brain’s sensitivity to unexpected outcomes. This was found in a study conducted by a team of psychologists and neuro-scientists from the University of Pennsylvania.

Through various methodologies, it was discovered that neurons in a particular part of the brain are very essential for reward-based learning. It was also found that learning was altered by these neurons based on the difference between what was expected and what was realized.

Lead author, Kareem Zaghloul, MD, PhD, postdoctoral fellow in neurosurgery at University of Pennsylvania, says that, “This is the first study to directly record neural activity underlying this learning process in humans, confirming the hypothesized role of the basal ganglia, which includes the substantia nigra, in models of reinforcement including learning, addiction and other disorders involving reward-seeking behavior. By responding to unexpected financial rewards, these cells encode information that seems to help participants maximize reward in the probabilistic learning task.”

The study investigators used the micro-electrode recordings that were acquired during deep brain stimulation surgery of Parkinson’s patients. They used it to study neuronal activity in the substantia nigra. The substantia nigra is the mid-brain structure that plays an important role in movement, as well as reward and addiction. The patient’s with Parkinson’s disease demonstrated an impaired learning in both, positive as well as negative feedback in the cognitive tasks. This took place due to the degenerative nature of their disease and the decreased number of dopaminergic neurons.

The recordings were further examined to determine whether their response was affected by reward expectation. For this purpose, the participants were asked to select either a red or a blue deck of cards presented on a computer screen. One deck of card was said to carry a higher probability of yielding a financial reward than the other deck. If the drawn card yielded a reward, then the counter showed the accumulated earnings. Whereas, if the draw did not yield any reward or the participant didn’t choose a card, then the screen went blank and a buzzing sound was emitted.

The study author’s state that this novel way of gauging the dopaminergic neuron activity; may be of great help in providing a better understanding about the basic cognitive activity.

These study findings were published in the Science journal.