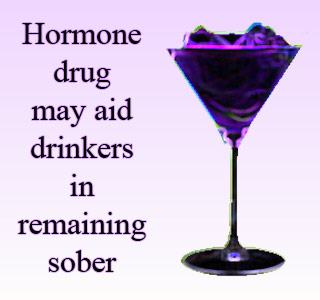 According to a new study, infertility and menstrual disorder medication pill may also treat alcoholism. This study was conducted by the University of California San Francisco-affiliated Ernest Gallo Clinic Research Center.

The study investigators discovered that the drug cabergoline or Dostinex, when injected in mice addicted to alcohol, apparently decreased their alcohol intake and addictive behavior, and also that they were less likely to experience a relapse.

Dorit Ron, PhD, a principal investigator at the Gallo Center and associate professor of neurology at University of California San Francisco, who also led the study, says that, “This is encouraging, because it demonstrates that cabergoline is specific for alcohol, but does not affect general reward or pleasure. One of the problems with some existing drugs to treat alcoholism is a side effect that decreases pleasure, making compliance an obstacle to sobriety.”

The pill form of this drug has been FDA approved for use in conditions caused by the body producing excess hormone prolactin. It was discovered that this drug increased the body’s production of glial cell line-derived neurotrophic factor (GDFN). Earlier findings of Ron and her colleagues had revealed that GDFN, when injected directly in the brain region linked to drug-seeking behavior, reduced the desire for alcohol in mice that were addicted to alcohol.

In the present study, rats were trained to press a lever to obtain alcohol. On being injected with the cabergoline drug, the rats were less likely to press the lever. This drug was also found to be beneficial for reducing relapse risk, which is usually a major problem faced by abstainers.

This drug gives new hope for the treatment of alcohol addicts, however the conduction of human clinical trials are recommended before this drug can be safely prescribed.

Their findings are published online in the Biological Psychiatry journal.