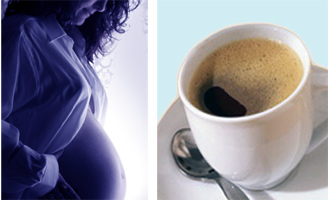 According to a new study conducted by the Kaiser Permanente Division of Research, high doses of caffeine on a daily basis during pregnancy can cause an increased risk of miscarriage. This could include coffee, tea, caffeinated soda or even hot chocolate.

Making this study more notable is the fact that for the first time it controlled pregnancy-related symptoms of nausea, vomiting and caffeine aversion that tended to interfere with the determination of caffeine’s true effect on miscarriage risk. This means that this study for the first time ever thoroughly controlled morning sickness (which generally causes many women to avoid caffeine) since previous research had showed a link between caffeine consumption and miscarriages.

According to De-Kun Li, MD, Ph.D., an investigator with the Kaiser Permanente Division of Research and lead investigator of the study, “This study strengthens the association between caffeine and miscarriage risk because it removes speculation that the association was due to reduced caffeine intake by healthy pregnant women.”

The study observed around 1,063 pregnant women who were also members of the Kaiser Permanente in San Francisco from October 1996 through October 1998. the study looked at caffeine’s effect among the women who had never changed their pattern of caffeine consumption during their pregnancy term.

The study also found that the increased miscarriage risk appeared to be due to the caffeine itself, rather than other possible chemicals in coffee. This is because caffeine intake from non-coffee sources like caffeinated soda, tea and hot chocolate showed a similar increased risk of miscarriages.

“The main message for pregnant women from these findings is that they probably should consider stopping caffeine consumption during pregnancy because this research provides clearer and stronger evidence that high doses of caffeine intake during pregnancy can increase the risk of miscarriage,” said Li.

For a while now, the reasons that back the fact that caffeine could harm a fetus have been suspected. It is known that caffeine crosses through the placenta to the fetus. However, it can be difficult for the fetus to metabolize because of the under-developed metabolic system. Further, caffeine could also influence cell development and decrease placental blood flow, which may lead to adverse effects on fetal development.

However, critics say that the association was not so much a high dose of caffeine intake that increased the risk of miscarriage, rather it was the women with a healthy pregnancy, who were more likely to reduce their caffeine intake due to nausea, vomiting and aversion of caffeine.

“Therefore, the critics claimed that the observed association was a result of reduction of caffeine intake by healthy pregnant women,” said Li.

Tracy Flanagan, MD, Director of Women’s Health, Kaiser Permanente Northern California advises mums-to-be saying, “”If you definitely need caffeine to get you going, try keeping it to one cup or less a day. Avoiding it may be even better. Consider switching to decaffeinated coffee and other decaffeinated beverages during your pregnancy. Learn to perk up instead with natural energy boosts like a brisk walk, yoga stretches, snacking on dried fruits and nuts.”