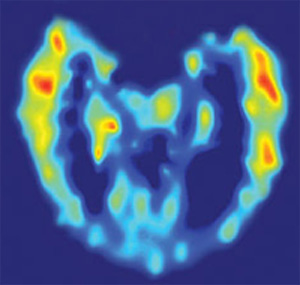 Soon, there will be a test that may be able to detect Alzheimer’s disease at an early stage. This test called DETECT, was developed by the Georgia Institute of Technology and Emory University.

It was Dr. David Wright of the Emory University School of Medicine who helped to develop the test. The entire test lasts for 10 minutes and has been designed to gauge reaction time and memory- functions that when impaired are associated with the earliest stages of Alzheimer’s Disease.

The test is a specially modified, shortened version of the traditional pen and paper test, which generally lasts 90 minutes and is given by a trained technician in a quiet environment because any distractions could influence the patient’s score and reduce the test’s effectiveness.

“Families usually wait until their mom or dad does something somewhat dangerous, like forgetting to take their medications or getting lost, before bringing them in for testing. At that point, the patient has already lost a significant portion of their cognitive function,” said Wright.