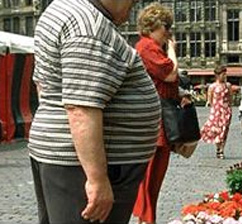 Are you obese or perhaps a little overweight and on the heavier side? Well, now you have something else to blame, besides your diet of course. You can safely blame it on your social nature. This may sound a bit ridiculous, but a new study has actually found that extroverted, outgoing and sociable people are more likely to be overweight, while the anxious and worried types of people tend to be thin.

Masako Kakizaki of Tohoku University and his colleagues questioned around 30,000 people who were aged between 40 and 64 in northeastern Japan, about their height and weight. These participants were also given a personality test.

It was found that extroverts had a greater chance than other people to have a body mass index (BMI) of over 25. This BMI is commonly used as the definition of being overweight.

During the study, after controlling for other factors like smoking, men in the most outgoing group were 1.73 times more likely to be obese than most of their introvert counterparts. Sociable women were also 1.53 times likely to be obese.

On the other hand, those who had the most anxious and worried personalities were twice as likely as the least anxious to be underweight, or have a BMI of less than 18.5.

The researchers said, “These results may provide clues to devising more effective measures for preventing overweight, obesity or underweight.”