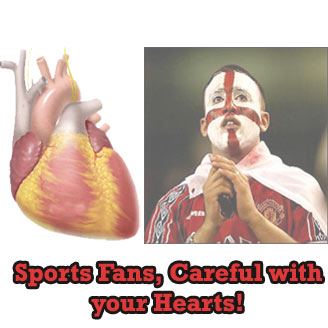 So it’s a dramatic penalty shoot out, we’re 1-1 with Arsenal and Cristiano’s next to work his magic. Hearts pounding, fists clenched, minds racing. So what do we do, lads. Well relax. What? Why? Here’s why; German researchers in a study have stated that emotionally tumultuous sporting events could increase the risk of cardiovascular incidents.

While studying the 2006 World Cup, results show that the risk of men having heart attacks or other heart problems hikes by three times on days when their teams play.

Dr. Ute Wilbert-Lampen of Ludwig- Maximillians University in Munich and his colleagues in their report for the New England Journal of Medicine have stated that “Viewing a stressful sporting match more than doubles the risk of an acute cardiovascular event.” Also “The more important the game, the greater the risk.”

Researchers say that the outcome of the game isn’t the determinant of the stress trigger but rather the strain and excitement experienced while the game is on.

In order to more fully understand the impact these games have on health, the researchers took account of over 4,279 medical reports in Germany itself during the seven days in which the German team played , 24 days when matches where played among teams of different countries and 242 days in years 2003, 2005 and 2006 as control period.

Results have shown that during six of the seven days wherein the German team played an increase in the number of cardiac emergencies were recorded as compared to days in the controlled period. The number peaked when the Germans defeated the Argentines in a dramatic penalty shoot out . However Germany’s steady win over Portugal for the third place produced no drama in the emergency ward.

Researchers have recommended that doctors consider increasing the doses given to their heart patients and also give fans with heart-related conditions some behavioral therapy to deal with the stress of a potentially intense sporting event. Shall we forward this one to Sir Alex then?