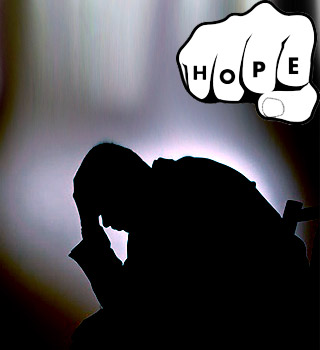 A recent research from the University of Alabama, Birmingham, and Ohio State University reveals that without having to depend on a prescription, “hope therapy” may help fight depression. Researchers presented evidence of fewer people showing depression symptoms if they had hope.

At the annual meeting of the American Psychological Association in Boston on Saturday, Cheavens and Laura Dreer of University of Alabama at Birmingham’s during a symposium in Boston exhibited some of the latest research on the role of hope to fight depression.

Jennifer Cheavens, assistant professor of Psychology at the university, mentioned, “We’re finding that hope is consistently associated with fewer symptoms of depression. And the good news is that hope is something that can be taught, and can be developed in many of the people who need it. If you feel you know how to get what you want out of life, and you have that desire to make that happen, then you have hope.”

Cheavens noted that there were two components of hope namely a map or pathway to achieve what you want and the motivation and strength to stick to that path. She pointed out that one should not mistake hope for optimism as both are very different. Optimism is the general expectancy that good things are bound to happen.

Cheavens further commented, “Hope seems to be protective for caregivers. Many of the people who seek therapy are not mentally ill – they don’t meet criteria for depression or other illnesses. So if you focus primarily on what is wrong with them, there may not be much progress. Hope therapy seeks to build on strengths people have, or teach them how to develop those strengths. We focus not on what is wrong, but on ways to help people live up to their potential.”

She also added, “We’re finding that people can learn to be more hopeful, and that will help them in many ways. What I think is exciting about hope therapy is the way we are learning from people who are doing very well. We have been figuring out what hopeful people are doing right, and taking those lessons and developing therapies and interventions for people who are not doing as well. And the great news is that it seems to work – we can teach people how to be more hopeful.”

For the study, the researchers analysed 97 adults most over age 60, who had been diagnosed with macular degeneration or other conditions that would cause them to lose their sight. Cheavens and Dreer measured hope and depression in the subjects with low vision as well as their caregivers.

They found that if patients themselves had symptoms of depression, the caregivers were more likely to have significant depressive symptoms. Those caregivers who scored high on measures of hope had fewer depressive symptoms, even if the patients were depressed. The study showed that there was a feeling of less sense of burden among higher-hope caregivers along with higher satisfaction in life.

In yet another study by Cheavens and her colleagues, a hope therapy treatment test was administered on a sample of 32 people recruited through newspaper ads and flyers. The ads asked people to volunteer for weekly group meetings designed to increase participants’ abilities to reach goals.

For this study, researchers specifically analysed people who were not diagnosed with depression or other mental illnesses, but who felt dissatisfied with where they were in life. Led by trained leaders, about half the study participants took part in eight, two-hour group sessions. As part of the sessions, new hope-related skills were taught to the participants. These included identifying goals, ways to achieve them, and how to motivate themselves. It was observed that as compared to non-participants., participants of the hope therapy had reduced depressive symptoms. Cheavans also asserted that hope was something that could be developed in people.

The study is published in the journal Social Indicators Research.