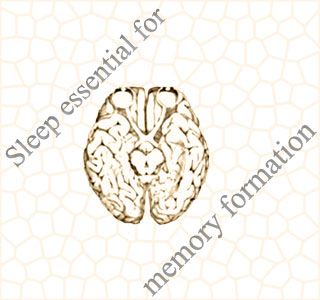 All night-owls, other than feeling sleepy the next day, may also have to face another negative outcome. According to a latest study, sleep is very essential for memory formation. These investigators, for the first time portray the process of the cellular changes in the brain, which may influence memory formation. This study was conducted by the scientists at the University of Pennsylvania School of Medicine.

They state that the brain differs in both its sleeping as well as wakeful state. For this study, the scientists made use of an experimental model of cortical plasticity, which is the rearrangement of neural connections in response to life experiences. It is stated that by viewing changes in the cortical plasticity, the scientists could get a clear idea of how memories form in the brain. Their earlier study had revealed that when young animals after witnessing visual cues, were permitted to sleep; they experienced a more severe rearrangement of neurons in their visual cortex as compared to the animals that were not permitted sleep. The mystery behind this process has now been unveiled by these study investigators.

Marcos Frank, PhD, Assistant Professor of Neuroscience, University of Pennsylvania School of Medicine, says that, “This is the first real direct insight into how the brain, on a cellular level, changes the strength of its connections during sleep,” He further states, “We find that the biochemical changes are simply not happening in the neurons of animals that are awake. And when the animal goes to sleep it’s like you’ve thrown a switch, and all of a sudden, everything is turned on that’s necessary for making synaptic changes that form the basis of memory formation. It’s very striking.”

The study investigators state that this study could form the base of future studies to be conducted on human memory. These findings could help in understanding why humans need sleep and why the lack of it affects them to a certain degree. It could also aid in developing various new treatments that can efficiently balance the lack of sleep in an individual.

Their findings are published in Neuron.