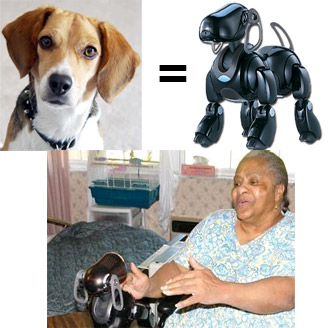 Keeping a pet such as a cat or dog has been proved to be beneficial to people suffering from a range of ailments and even the elderly. But, now researchers have shown that when it comes to relieving loneliness among seniors, a robotic dog is just as effective as the real thing.

The second group got visits from the AIBO Entertainment Robot, which is a shiny robot dog made by Sony. AIBO uses artificial intelligence to interact with its environment and expresses emotion.

The third group received no such visits from either dog.

Further down the line, the researchers asked the elderly questions about how lonely they felt and how attached they felt to either Sparky or AIBO. They discovered that both groups who received visits from the robot dogs (AIBO) were less lonely and more attached.

“The most surprising thing is they worked almost equally well in terms of alleviating loneliness and causing residents to form attachments. For those people who can’t have a living pet but who would like to have a pet, robotics could address the issue of championship. It really improves loneliness considerably,” William A. Banks, M.D., professor of geriatric medicine at St. Louis University said in a telephone interview.

“There is a lot of loneliness in nursing homes and animal-assisted therapy – whether from a dog or a robot – is one answer for addressing that,” Dr. Bank said.

Well, now who would have thought that robots could offer an answer to loneliness, one of the most horrid feelings to go through? At the rate at which robotics is progressing today, who knows, robots might soon become man’s best friend too!