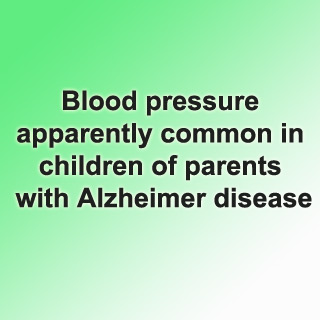 This news concerns the grave Alzheimer’s disease. A new study claims that high blood pressure which is apparently a proof of arterial disease and markers of inflammation in the blood in middle age seems more common in people whose parents have Alzheimer’s disease as compared to people without a parental history of the disease.

Preceding twin studies approximate that apparently as much as 60% of the threat for Alzheimer’s disease is supposedly under genetic control. This was provided as background information. A different study claimed to have recognized numerous vascular and inflammatory threat factors in midlife that may perhaps be linked to the later switch into cognitive decline connected to Alzheimer’s disease.

Vascular and inflammatory factors like high blood pressure and levels of pro-inflammatory proteins called as cytokines in the blood was compared between 206 children of 92 families with a history of Alzheimer’s disease and 200 offspring of 97 families devoid of any parental history. This comparison was conducted by Eric van Exel, M.D., Ph.D., of VU University Medical Center, Amsterdam, and colleagues. The experts gauged blood pressure; acquired blood samples to evaluate genetic characteristics and levels of cholesterol, along with cytokines and other inflammation-related substances. They also gathered sociodemographic characteristics, medical history and information about diet, exercise and stress levels.

It was seen that about more people of whose parents had Alzheimer’s disease apparently carried the APOE e4 gene, identified to be linked to the condition, as compared to those with no family history. Moreover, those with a family history apparently had higher systolic and diastolic blood pressures, a lesser ankle brachial index and elevated levels of numerous dissimilar pro-inflammatory cytokines.

The authors commented, “Our study shows that high blood pressure and an innate pro-inflammatory cytokine response in middle age significantly contribute to Alzheimer’s disease. As these risk factors cluster in families, it is important to realize that early interventions could prevent late-onset Alzheimer’s disease. One could argue for a high-risk-prevention strategy by identifying the offspring of patients with Alzheimer’s disease, screening them for hypertension and vascular factors and implementing various (non)pharmacological health measures.”

Other cardiovascular risk factors like high blood cholesterol and glucose levels were apparently not linked to parental Alzheimer’s disease. These other components may not be as strongly connected to cognitive decline.

The study was published in the Archives of General Psychiatry, one of the JAMA/Archives journals.