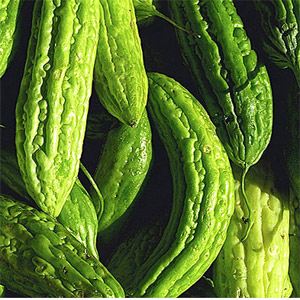 Researchers in Sydney have found that bitter melon contains a powerful treatment for Type 2 diabetes. Bitter melon is often used as a traditional Chinese medicine.

The research team was from the Garvan Institute of Medical Research and the Shanghai Institute of Materia Medica. They pulped around a ton of fresh bitter melon and extracted four rather promising bioactive components.

These four compounds appear to activate the enzyme AMPK, a protein which is well known for regulating fuel metabolism and enabling glucose uptake.

Professor David James, Director of the Diabetes and Obesity Program at Garvan said, “We can now understand at a molecular level why bitter melon works as a treatment for diabetes. By isolating the compounds we believe to be therapeutic, we can investigate how they work together in our cells.”

Those who suffer from Type 2 Diabetes have an impaired ability to convert the sugar in their blood into energy in their muscles. This is partly because they don’t produce enough insulin, and also because their fat and muscle cells don’t use insulin effectively. This phenomenon is known as insulin resistance.

Exercise activates AMPK in muscle, and this in turn mediates the movement of glucose transporters to the cell surface. This happens to be a very important step in the uptake of glucose from the circulation into tissues in the body. Thus, exercise is recommended as part of the normal treatment program for people with Type 2 diabetes.

The four compounds isolated in bitter melon perform a very similar action to that of exercise as they activate AMPK.

Researchers Jiming Ye and Nigel Turner both stress that while there are well known diabetic drugs on the market that also activate AMPK, they can also have some side effects.

“Bitter melon was described as “bitter in taste, non-toxic, expelling evil heat, relieving fatigue and illuminating” in the famous Compendium of Materia Medica by Li Shizhen (1518-1593), one of the greatest physicians, pharmacologists and naturalists in China’s history,” said Professor Ye. “It is interesting, now that we have the technology, to analyze why it has been so effective.”

Ye said that the advantage of bitter melon is that there are no known side effects. Practitioners of Chinese medicine have also been known to be using it for decades.