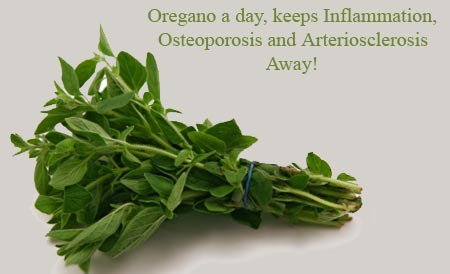 Spices are not only the most important flavouring agents in foods but they also have some very important health benefits. Like we reported on turmeric being the savior for type 2 diabetics; there is yet another spice that can have positive effects on health. It is our very own, none other than, the humble – the Oregano that makes our pizzas so pizzalicious.

No one would have thought about Oregano from the health point of view right? Thanks to the researchers at the University of Bonn and the ETH Zurich, the medicinal properties of the spice have been revealed. Oregano has been discovered to carry in it a substance- beta-caryophyllin (E-BCP) – that not only cures inflammation but can also be helped to cut the risk of osteoporosis and arteriosclerosis.

Beta-caryophyllin is known to be present in many other spices and herbs and plants used in food such as basil, rosemary, cinnamon, and black pepper and it is estimated that we take in around 200 milligrams of the substance everyday via our foods.

“Our results have revealed that E-BCP inhibits inflammation”, declared Professor Dr. Andreas Zimmer of the Life&Brain-Zentrum in Bonn. The researchers experimented on mice by administering them with E-BCP (described as the active ingredient). “Experiments on mice have shown that this substance is also effective against osteoporosis,” said Dr. Zimmer.

“We have used E-BCP to treat mice with paws swollen due to inflammations”, explained Dr. Jürg Gertsch of the ETH Zürich. “In up to 70 per cent of cases the swelling subsequently subsided”.

E-BCP affects what are known as the ‘Cannabinoid-CB2 receptors’ in our cell membranes, influencing the cell behaviour, like inhibiting cell’s production of phlogogenic signal substance.

This might make you think that the ingredient gives you a high like cannabis! On the contrary, this substance does not intoxicate one even after affecting CB2 receptors, very much unlike other substances that are also known to affect cell behaviour. The reason for this is that there are another set of receptors known as the CB1 receptors which are present in the nerve cells of the brain and are closely related to the CB2 ones. Substances influencing CB2 also end up intoxicating CB1, an effect experienced by marijuana smokers. On the other hand, in case of E-BCP, it successfully docks with CB2 without intoxicating CB1!

The finding is a very important one implying the use of E-BCP in new drugs especially because it is so commonly found – also one of the reasons for being a special attraction to the pharmacological researchers.

CB1 and CB2 receptors are a part of endocannabinoid system which plays a major role numerous types of disorders – like cardiac disorders, allergies, chronic pain and may affect memory – when it gets out of control. “Endocannabinoids are formed by the body itself and maintain its equilibrium” explains Professor Zimmer. Therefore, when the immune-system behaves in an erratic manner causing inflammation, the endocannabinoids react in a defensive manner by putting a halt to the overreaction of immune system.

Therefore, E-BCP can control inflammations by docking on CB2 which may also help control disease like inflammation of intestinal tract (Chrone’s disease). “This compound could become an important dietary factor for inhibiting such diseases of modern civilization”, concludes Dr. Jürg Gertsch. “The endocannabinoid system comes into play when the equilibrium of the metabolic processes has been destroyed”, declares Professor Zimmer. “It is similar to the antidepressants in that, although they help for depressions, they don´t do anything to brighten the mood of a healthy person”

Hence, one concluding point that has to be noted is that although oregano helps in inhibiting certain disorders, consuming it will not make anyone healthier but will maintain the health of one’s body. So don’t overload yourself with pizza!