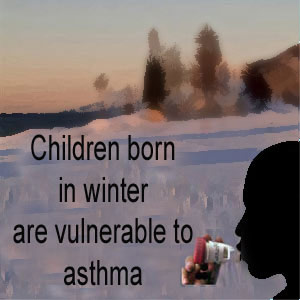 According to a New Study, children who are born four months before winter are more prone to developing childhood asthma when compared to children born at any other time of the year.

The medical record of more than 95,000 children and their mothers in Tennessee was studied. The study was undertaken in order to assess whether date of birth and winter respiratory viruses were linked to early childhood asthma. It was discovered that bronchiolitis during infancy was linked with vulnerability to childhood asthma. In autumn born babies the risk was greater.

Tina V. Hartert, M.D., M.P.H., associate professor of medicine and director of the center for Asthma Research at Vanderbilt University, and also the principal investigator of the study, says that, “Infant age at the winter virus peak following birth independently predicts asthma development, with the highest risk being for infants born approximately four months prior to the peak, which is represented by birth in the fall months in the Northern hemisphere. Birth during this time conferred a nearly 30 percent increase in odds of developing asthma.”

This study for the first time revealed that the date of birth in connection with the peak in winter virus activity was solely responsible for the development of asthma. The study researchers lay down two probable reasons for this, namely; there is a genetic susceptibility common to both bronchiolitis and the development of asthma; and that an environmental exposure like winter viral infection causes asthma.

Dr. Hartert says, “The risk of progressing from bronchiolitis to asthma is almost certainly influenced by genetic factors. However, if this association were due only to genetic factors, there would be a seasonal effect on infection but not on asthma…Instead we have shown that there is variation in the risk of developing asthma by the timing of birth in relationship to the winter virus peak for each year studied. This supports a causal relationship of childhood asthma with the winter virus peak after birth.”

It is not possible to predict the height of winter virus season, since it can fluctuate by up to 10 weeks a year. Nearly 70% of infants are infected in their first year of life. According to Dr. Hartert avoiding winter virus infection is a very difficult task. Families whose infants are very prone to developing asthma can follow a number of ways to reduce the risk connected with birth timing, which involves avoiding infection through administration of a vaccine or immunoprophylaxis or timing of birth in the spring months. These techniques can be used to prevent asthma. These interventions have to be studied in detail.

According to Dr. Hastert, presently no specific prevention methods exist. He further says that, the next step is support for the studies which aim at finding solution and determining if with the prevention of these infections during infancy can prevent asthma in infancy.

This research was published in the American Journal of Respiratory and Critical Care Medicine issue, a publication of the American Thoracic Society.