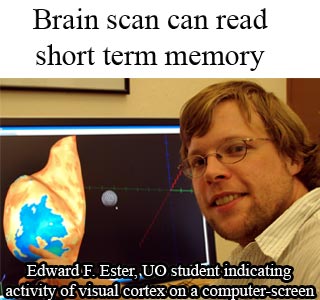 According to a latest study, functional magnetic resonance imaging can read the kind of information an individual is holding back in their short term memory, based on the patterns of their brain activity. This ground breaking study was conducted by the psychologists from the University of Oregon and the University of California.

Experiments were conducted on subjects, where they witnessed an object for a little while and were then asked to hold on to an aspect of that object in their mind, after that particular object had disappeared. The researchers recorded the brain activity of these subjects during memory selection and storage processing in their brain’s visual cortex, through functional magnetic resonance imaging. These investigators by examining the blood flow activity could detect the specific color or orientation of a particular stimulus that was intentionally stored by the observer.

“Another interesting thing was that if subjects were remembering orientation, then that pattern of activity during the delay period had no information about color, even though they were staring at a colored-oriented stimulus. Likewise, if they chose to remember color we were able to decode which color they remembered, but orientation information was completely missing,” says Edward Awh, professor of psychology, University of Oregon.

The investigators discovered that the sensory part of the brain had a particular activity pattern which reflected the observer’s intentionally stored aspect of that object. The study investigators state that their study demonstrates that the accurate aspect of the object that the observer is remembering can be seen in their visual cortex. These findings indicate that people use the same part of their brain which is involved in the way they see an object, for memory storage as well.

This study was funded by a grant from the National Institutes of Health and by the support provided from Robert and Beverly Lewis Center for Neuroimaging, University of Oregon.

Their findings are present in the Psychological Science issue.