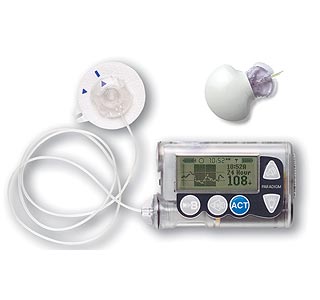 In the month of June we mentioned insulin pills that would increase the convenience of diabetic patients rather than being injected would soon be available . A year-long clinical trial by Yale University and other institutions revealed that treatment with sensor-augmented insulin pumps leads to greater control of type 1 diabetes than a daily regimen of multiple insulin injections. This included a system of continuous glucose monitoring.

The study enlisted 485 adult and child patients in the randomized and controlled trial. They further compared the efficiency of both the methods. After one year, average plasma glucose concentrations greatly reduced for both adults and children in the pump-therapy group as compared to the injection therapy group.

“This technology of combining insulin pumps and continuous glucose monitoring can help patients safely reach their goal of glycemic control, while minimizing the risk of severe hypoglycemia and weight gain,” explained William Tamborlane, M.D., professor and section chief of pediatric endocrinology at Yale School of Medicine and Yale-New Haven Children’s Hospital, a member of the steering committee of the study and second author on the paper.

Further these concentrations are known to highlight blood sugar control in type 1 diabetes. The complications linked with type 1 diabetes can be lowered with enhanced glycemic control. However maintaining this control is difficult specifically among children.

“Sensor-augmented pump therapy will be helpful to all patients with type 1 diabetes who were until now unable to effectively control their blood sugar levels, but it will be particularly beneficial for younger patients,” revealed Dr. Jennifer Sherr, M.D., who, along with Stuart A. Weinzimer, M.D. and Lori Carria, of the Department of Pediatrics, Yale School of Medicine, were the other Yale investigators involved in the study

Recent analysis regarding the efficiency of insulin pumps or continuous glucose monitoring devices underlined that among young adults they enhanced blood sugar levels better than daily injections. However findings among children have been inconsistent. Experts revealed that sensor-augmented pump therapy seemingly benefited children as considerably as adults. This therapy integrates the two technologies and permits patients and doctors to evaluate treatment and response through internet-based software.

These findings were presented at the annual meeting of the American Diabetes Association, and appear online in the New England Journal of Medicine.

New laser treatment may be used to stitch wounds