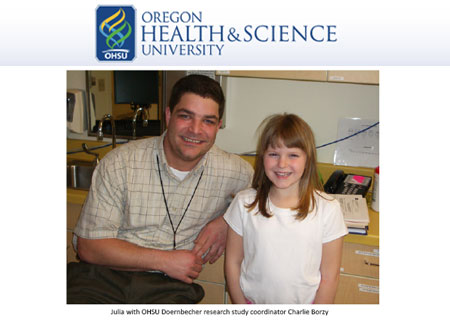 OHSU Doernbecher Children’s Hospital, part of largest-ever NIH-funded pediatric epilepsy clinical trial seems to analyze the most effective of three standard treatments. From the initial outcomes, it emerged that one of the oldest available anti-seizure medications namely ethosuximide is the most effective treatment for childhood absence epilepsy.

As part of the NIH Childhood Absence Epilepsy Study Group, OHSU Doernbecher Children’s Hospital is claimed to be one of 32 comprehensive pediatric epilepsy centers nationwide chosen to participate in this landmark clinical trial. A comparison of three medications typically known to be used in the treatment of the most common childhood epilepsy syndrome, childhood absence epilepsy was compared by the study group.

Characterized by frequent non-convulsive seizures, childhood absence epilepsy may cause the child to stop what he or she may be doing and stare for up to 30 seconds at time. Earlier to this, there seems to have been no definitive evidence on the drug that may have been working the best for this condition.

“Much of our scientific understanding of childhood epilepsy care today comes from historical experience or studies involving adult patients with related, but not identical, conditions,” elucidated Colin Roberts, M.D., OHSU Doernbecher’s principal investigator for the study, assistant professor of pediatrics and neurology, and director of OHSU Doernbecher’s Pediatric Epilepsy Program. “This study is an important milestone in our understanding of childhood absence epilepsy. Never before have we been able to document in such a comprehensive, scientific fashion the best options to treat children with this condition.”

Around 453 children newly diagnosed with childhood absence epilepsy from July 2004 to October 2007 were enrolled by the study group. The participants were then randomly assigned to ethosuximide, valproic acid or lamotrigine. Seemingly, the dosage of drugs was incrementally augmented until the child was believed to be seizure-free. Following 16 weeks of therapy, the scientists discovered ethosuximide and valproic acid to be significantly more effective as compared to lamotrigine in controlling seizures. They further appeared to have no intolerable side effects. In addition to this, ethosuximide was also determined to have considerably fewer negative effects on attention.

The study goes on to reveal the case of Julia, daughter of Nick and Michelle Skimas, of Vancouver, Wash., who was enrolled in the study in April 2007. After the commencement of medication, Julia reportedly stopped having seizures. Prior to the diagnosis and treatment, Julia would unexpectedly stop while reading aloud, pause for 10 to 15 seconds and then resume from where she had left off. The child now 8 was apparently not aware that anything had happened.
While Michelle assumed Julia to simply be taking breaks to look at the pictures, this went on for two to three weeks. Until, when on a family vacation Julia abruptly stopped in the middle of pitching a baseball and slowly started turning in a circle. She was unaware of what was happening and also had no recollection of what had occurred.

“That did it,” said Michelle. “We took Julia to be evaluated as soon as we got back.”

Brain tumor was ruled out after an EEG and an MRI, however, Julia was diagnosed with childhood absence epilepsy. Recommended to be enrolled in a new drug trial at OHSU Doernbecher by her primary care physician, Nick and Michelle were initially leery of giving their daughter medication. How Julia’s seizures would have a serious impact on her learning and development without treatment was then explained to the parents by Roberts and his team. A long-term follow up for the study participants is suggested by the national study group.

“The initial outcomes from this study describe one of many aspects of childhood absence epilepsy evaluated by the study group. Collaborative studies like this lay the groundwork for many critically important studies to follow that will define the proper care of children with seizures,” mentioned Roberts.

The study is published in this week’s New England Journal of Medicine.