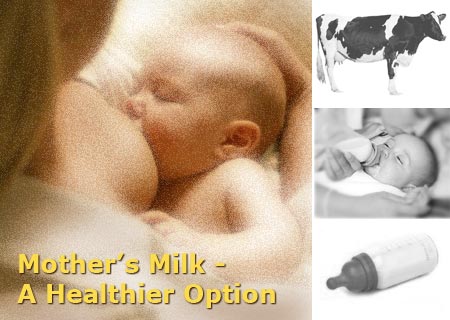 Both human and cow milk are considered to be a complete food, with a minor exception that cow’s milk has little less iron as per human requirements.

1. Protein in milk: Cow’s milk has 3 times more proteins and 4 times more calcium. This is because the growth rate of calves is much more than human infants. Cow’s milk contains faster growing steroids and hormones. If we drink this milk without diluting then it creates an imbalance in our system, especially if taken in huge amounts regularly.

More proteins mean more acid and to neutralize this acid, calcium is leached out from the bones and teeth and they become weak. Furthermore, excess proteins place an additional burden on the kidneys leading to their premature degeneration due to work.

About 1.2 % of breast milk is protein. This protein is made up of curd protein (casein) and whey proteins (lactoalbumin and lactoglobulin). Cow’s milk has 3.3 % protein and this extra is composed of 6 times more casein than in breast milk.

When milk enters a baby’s stomach, it gets turned into curds and whey. The curds are made of casein. The curds of cow’s milk are bulkier and tough than those of breast milk.

Breast milk forms finely separated curds in the stomach which passes quickly and easily from the small intestine where they are broken down. This is why the stomach of breast milk fed babies feels empty faster than those fed with cow’s milk, and therefore breast fed babies become hungry faster.

Cow’s milk curd stays in stomach for almost 4 hours. A baby uses only half of the available cow’s milk proteins, overloading kidneys and making stools more bulky as compared to breast fed.

Clostrum that is the special milk in the first few days after pregnancy is very essential for a baby as it contains high amount of lactoglobulin, and therefore plays an important immunological role for the rest of the baby’s life.

Antibodies present in cow’s milk are produced against diseases which are seen in cow and not in humans, so the antibodies of cows are not of much help to humans. Further on while heating the cow;s milk, the lactoglobulin gets altered and therefore its antibody\immune property decreases more.

2. Fats in milk: Fats of cows or buffalos milk are more saturated and therefore produce more cholesterol while breast milk produces very less cholesterol as it has more of unsaturated fats.

Cow’s milk fats get converted into lipase and further releases palmitic acid which washes off the calcium in stools, which is not the case with breast milk.

3. Calcium: Calcium is absorbed depending upon ratio of calcium and phosphorus. This ratio is inappropriate in cow’s milk and is proper in breast milk.

Cow’s milk contains high calcium which adds up to acidity and early tooth decay or gets deposited on soft tissues and forms plaques, and also its excretion is again overburdening to the kidneys.

6. Minerals: Whole cow milk contains almost 4 times as many minerals as breast milk which is again overburdening the infant’s kidney. Also vit.c, vit.e and copper are present in required proportion in breast milk which helps good iron absorption. These vitamins are less in cow’s milk.

7. Mucus: More the mucus, more the respiratory disorders. Mucus gets accumulated in respiratory tracts and thereby leads to cough and cold problems faster.

Mucus content of cow’s milk is the highest amongst most of the foods. There’s 300% more casein in cow’s milk as compared to mother’s milk and this is responsible in the formation of mucus. This mucus also dampens the fluid system of body. It prevents absorption of nutrients from the intestine and results in weakness and lethargy.

8. Water:The water content of cow’s milk is less as compared to breast milk

9. Milk allergy: The b-lactoglobulin in cow’s milk is responsible for creating problems in human body like vomiting, nausea, constipation, respiratory problems etc. This is absent in breast milk.

The iga factor present in breast milk protects the body from diseases which is usually destroyed from cow’s milk during the boiling process.