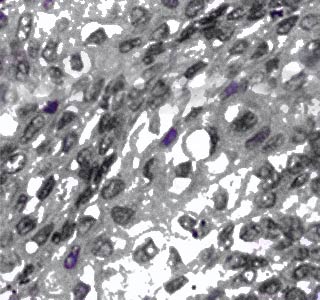 Now it may be possible to identify cancer cells at an early stage, with the help of naturally fluorescent molecules. It has been stated that a high amount of this fluorescent molecule, which is said to be commonly found in all living cells, may be helpful in the early detection of cancer. This research may help in differentiating cancer molecules from the regular cells. The research was conducted by the Pennsylvania State University.

“Dysfunctional enzymes in the mitochondria are known to be associated with serious health problems such as cancer and neurodegenerative diseases. By detecting the level of nicotinamide adenine dinucleotide and its distribution inside living cells, we should be able to monitor the mitochondrial activity and thus the integrity of any given cell, without adding potentially toxic dyes or actually destroying the cell,” says Ahmed Heikal, associate professor of bioengineering, Pennsylvania State.

It is believed that a major obstacle in the diagnosis of cancer is differentiating cancer cells from other normal cells. Through the discovery of these molecules this problem is thought to be solved. The researchers have stated that through the use of state-of-the-art techniques, they have assessed the nicotinamide adenine dinucleotide accurately in live cells.

Heikal elucidates that, “We realized that the fluorescence intensity not only depends upon the concentration of NADH but also on its structure — free or enzyme-bound — as well as its place inside the cell — in the cytoplasm (non-nucleus part of the cell) or in mitochondria. Since a free NADH molecule would rotate — tumble — faster than enzyme-bound NADH, we were able to develop a technique called rotational diffusion imaging to establish a direct measure of the concentrations of free and enzyme-bound NADH throughout a living cell, whether in the cytosol (cell fluid) or the mitochondria.”

Unlike previous researches, where the destruction of the cell was required to gauge the level of nicotinamide adenine dinucleotide; the present research believes that it is necessary to avoid killing the cell for accurately measuring this level. This act of not killing the cells could be of great help in the diagnosis of cancer as well as in other researches related to human health and drug delivery.

This article was published in the Journal of Photochemistry and Photobiology B: Biology.