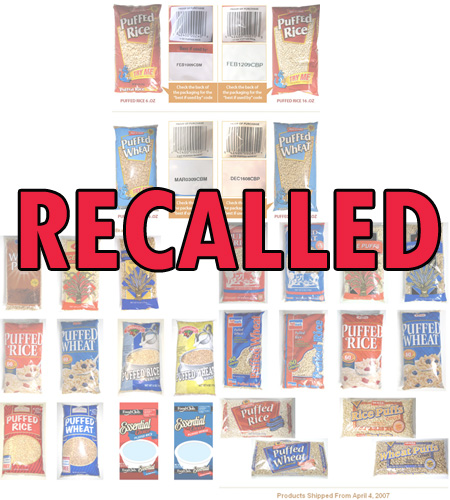 On April 5, Minneapolis-based company Malt-O-Meal recalled two types of its cereals due to salmonella contamination. The cereals were recalled by the company of their own accord. Now the FDA is probing whether the contamination is connected to more than 23 reported illnesses across 14 states including Massachusetts, Vermont and New Hampshire, due to the salmonella from recalled cereal.

Amongst the cases reported, three people have been hospitalized till now and fortunately no deaths have occurred.
The cereals which were shipped with a “Best if used by” date between April 8, 2008 and March 18, 2009, include unsweetened Puffed Rice as well as unsweetened Puffed Wheat cereals.

Salmonella is a rod-shaped bacterium, some of which causes food poisoning, typhoid fever, and other infectious diseases in humans and domestic animals. Its symptoms include nausea, vomiting, fever, diarrhea and cramps.

Those having stocks of the cereal in their homes have been advised to throw them away.

The list of affected cereals can be found at www.malt-o-meal.com/recallinfo.