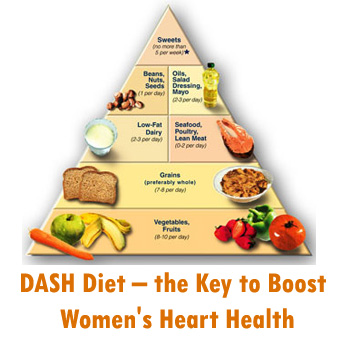 Women who have an intake of diets which are on the lines of the Dietary Approaches to Stop Hypertension (DASH) diet, could stand a decreased risk of coronary heart disease and stroke, shows a new report. The DASH diet is high in plant proteins, fruits and vegetables, moderate in low-fat dairy products and low in animal protein.

As per the background information in the latest report, the DASH diet apparently cuts down both systolic (top number) and diastolic (bottom number) blood pressure in individuals with high or normal blood pressure. In addition, the prescribed diet also helps in reducing low-density lipoprotein (“bad”) cholesterol and is suggested in the national dietary guidelines as an apt example of a healthy eating pattern.

Teresa T. Fung, Sc.D., of Simmons College, Boston, and colleagues analyzed 88,517 female nurses aged from 34 to 59 in the Nurses’ Health Study who did not have cardiovascular disease or diabetes in 1980. The women reported the types of foods they ate regularly over the previous year for seven times for a period stretching from 1980 through 2004.

The DASH score for each woman was then calculated by the experts, on the basis of eight food and nutrient components. The scores went up when they had a greater intake of food items such as fruits, vegetables, whole grains, nuts and legumes and stayed close to the recommended quantities of low-fat dairy. Scores were at a low when the participants increased the intake of red and processed meats, sweetened beverages and sodium.

A report generated through a period of 24 years helped in concluding that 2,129 women had a non-fatal heart attack, 976 died of coronary heart disease and 2,317 had strokes. Higher DASH scores were linked with a lower risk for heart disease and stroke. When groups were formed on the basis of the DASH scores, it was seen that one-fifth of the women who had diets that were most similar to the DASH diet were 24 percent less likely to develop fatal or non-fatal coronary heart disease and 18 percent less likely to have a stroke than the one-fifth of women with the lowest DASH scores.

Furthermore, in a subgroup of women who submitted blood samples, it was revealed that higher DASH scores were also linked with lower levels of C-reactive protein and interleukin 6. These compounds are signs of inflammation, which has been connected with heart disease risk.

The study authors further mention that similar studies should be carried out to establish if connections between the DASH-style diet and risk for heart disease and stroke remain similar in other populations too. Further on, the diet should be compared to others shown to predict the danger of heart disease, including the Mediterranean diet. The Mediterranean diet is a modern nutritional model originally inspired by the conventional dietary patterns of some of the countries of the Mediterranean Basin. Apart from stressing on regular physical activities, this diet emphasizes on abundant plant foods, fresh fruit as the typical daily dessert, olive oil as the principal source of fat, dairy products and fish and poultry consumed in low to moderate amounts, zero to four eggs consumed weekly, red meat consumed in low amounts, and wine consumed in low to moderate amounts. The diet is often regarded as advantageous for being low in saturated fat and high in monounsaturated fat and dietary fiber.

The new study which appears in Monday’s Archives of Internal Medicine received grants from the National Institutes of Health.