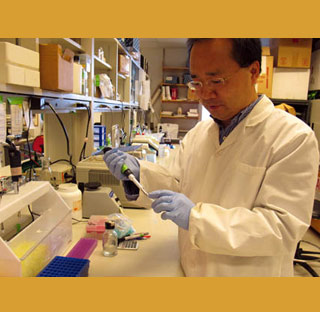 Cancer, one of the life-threatening diseases engulfing more 10 million people every year may not only produce negative health outcomes, but also hamper the quality of life. Novel investigations and discoveries in the field of cancer seem to be the only hope for a wide number of people around the globe. Roger Leng, a researcher from the University of Alberta in the Faculty of Medicine and Dentistry has now laid hands on a probable new target for cancer therapy.

The widely known gene in the human genome named p53 apparently suppresses tumors. Understanding the mechanism by which this gene is inactivated in cancerous cells can supposedly aid halt tumor growth. The MDM2 protein possibly lowers p53 within the body but in cancerous cells p53 is inactivated among more than 50 percent human tumors. This protein is seemingly unable to silence the tumor-suppressing protein on its own. Hence, whether MDM2 can deplete p53 in cancerous cells is questionable.

“Successful completion of the proposed experiments could lead to novel anti-cancer therapies that could potentially improve the prognosis for cancer patients and reduce the public-health burden from cancer,” added Roger Leng, a researcher in the Department of Laboratory Medicine and Pathology.

In the course of the investigation, it was asserted that MDM2 when paired with HDM2 completely degraded p53 in a laboratory model. During this process known as poly-ubiquitination, a specific protein may completely disappear in a cell. Also experiments on several cancerous human brain tissues were conducted and similar results were registered. The research findings can supposedly help in designing better drugs for tackling cancer.

The research is published in the journal Nature Medicine.