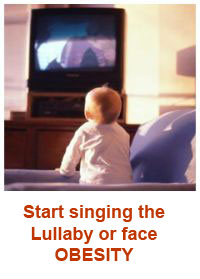 It’s always heavenly to watch a baby sleep peacefully but sadly if the baby does not sleep, there is a higher risk of obesity in those children. A new Harvard study found that children who sleep less than 12 hours risk themselves of being overweight during the pre-school stages.

Less sleep also has been linked to TV viewing which also aggravates the situation and adds on to the weight. Studies have found out that sleep-deprived adults produced more ghrelin, a hormone that promotes hunger, and less leptin, a hormone that relates to fullness. TV viewing adds on fuel to the fire by children munching on to the snacks and junk food that are ingested in a trance mode.

TV has always been blamed to snatch away the play time and physical activity from the children and it is an obvious reason of weight gain in children. Due to busy lives and both the parents toggling between home and work, children attimes follow an irregular schedule and less sleep also followed by an incorrect diet pattern.

“The main message for parents is that there has to be regularity in sleep in children. It’s very important to maintain a schedule,” said Dr. Michelle Cao of Stanford University’s sleep disorders clinic, who co-wrote an accompanying editorial in the journal but wasn’t involved in the study.