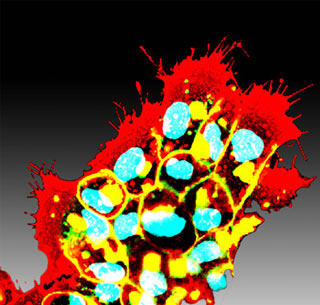 Almost every other day, we report about cancer and treatments for the disease. Here is another analysis that adds to the list. Investigators from the University College London (UCL) have seemingly laid hands on the mechanism employed by cells to group together and travel around the body. The research results can provide conclusions for the development of novel cancer treatments.

By utilizing embryonic cells, the experts have exposed a unique method to treat cancer wherein therapies can target cancer cells grouping together. The ultimate aim remains to halt progression of cancer cells and secondary tumors. In order to travel, the cells form protrusions like oars of a boat and move in the direction they want. It has been ascertained that when a single cell is secluded, then it produces oars in all directions and finally rows in circles. So for migrating efficiently cells have to first stick together.

“Being able to form a group with neighbour cells is advantageous for migration of embryonic cells as well as cancer cells during tumour metastasis – they have strength in unity. The findings suggest an alternative way in which cancer treatments might work in the future if therapies can be targeted at the process of group formation to stop cancer cells from spreading and causing secondary tumours,” allegedDr Roberto Mayor, UCL Department of Cell and Developmental Biology and lead author of the research.

Cells grouping together are assumed to contact with other cells restricting the formation of protrusions or ‘oars’. It can therefore be concluded that only cells on the outside edges of the group form protrusions, for the group to travel in a particular direction. It was mentioned that the group is pushed by the outermost ‘leader’ cells. Neural crest cells discovered next to the developing central nervous system in embryos were utilized by the scientists.

The researchers affirm that cells are able to evolve in various forms of cells such as heart, face, skin and muscle cells. During the experiment, investigators blocked surface molecules, proteins known as N-cadherin. These proteins are believed to be present on the neural crest cells and are connected in forming contacts between cells.

As the surface molecules were blocked, the cells were apparently unable to group together and travel. Similar results in cancer cells migrating in groups during metastasis are anticipated after the blockage of N-cadherin.

The research is published in the journal Developmental Cell.