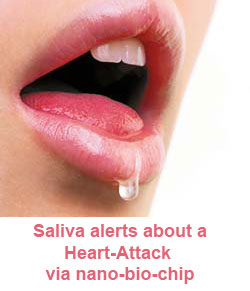 According to a study, now one can detect heart attack at early stages only with a few drops of saliva dabbed on to a nano-bio-chip. The nano-bio-chip could be useful for emergency reasons in the ambulance, the doctor’s dispensary or even the local chemist.

At the size of a credit card, the nano-bio-chip was tested by boffins from the University Of Kentucky College Of Dentistry where tests were conducted on 56 people who had a heart attack and 59 healthy subjects.

“Many heart attack victims, especially women, experience non specific symptoms and secure medical help too late after permanent damage to the cardiac tissue has occurred,” said John T. McDevitt, designer of the bio-chip. “Our tests promise to dramatically improve the accuracy and speed of cardiac diagnosis.”

The chip provides information on current risk of the patient having a heart attack and will even predict the risk of heart attack in the future. McDevitt and his colleagues at the University of Kentucky, University of Louisville, and The University of Texas Health Science Center at San Antonio had identified that a number of blood serum proteins that are significant contributors to, and indicate about cardiac disease. Leveraging microelectronics components and micro-fabrication which was developed initially for the electronic industry, but they developed a series of compact nano-bio-chip sensor devices that are biochemically-programmed to detect sets of these proteins in the saliva.

“These are truly exciting findings, since use of these tests could lead to more rapid diagnosis and faster entry of patients into treatment scenarios that can save lives,” said Dr. Craig S. Miller, of the Kentucky team.

The development of the test was reported at a recent meeting of the American Association for Dental Research. The nano-bio-chip could be of great help in treating and managing the heart attack at early stages and if it is detected in early stages, it will provide the patient a chance to improve on his health with proper diet and exercise which can be done after consulting a general physician.