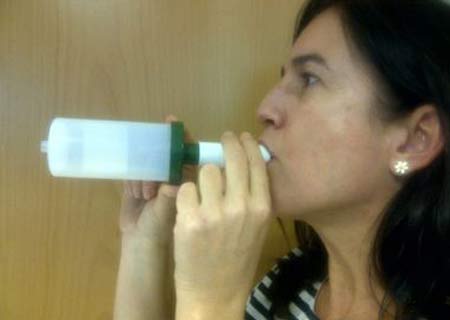 Many symptoms of cancer are assumed to be of routine diseases, which is why the tumor is detected at an advanced stage. An efficient avenue for timely diagnosis is what the medical terrain is looking forward to. However, as per this report by Technalia, we may soon locate the probability of lung cancer by a simple process of exhalation.

The team is basically developing biosensors that can spot the tumor markers related to lung cancer when an individual exhales a breath of air. Professionals believed that human breath comprises tons of organic compounds like acetone, methanol, hydrocarbons, acetone and so on. Also the team suggested that a single substance cannot serve as a biomarker for lung cancer, a combination of markers ought to be used.

Normal levels of markers in the breath are considered to be 1-20 parts per billion (ppb), while the same markers may elevate from 10 to 100 folds in the breath of ill persons. Firstly, breath specimens of a group of people were gathered via a breath collecting device. Extensive analysis on the same was carried out and the family or families of compounds that could act as biomarkers were selected.

Using modern techniques like chromatograph/mass spectrometry analysis (GC/MS), the differences between healthy and cancerous patterns of breath were gauged. Along the same lines, new substances for identifying the biomarkers were developed by the team. The scientists are also aiming to increase the reactivity of breath collecting devices.

On a concluding note, the team believes that the biosensors will improve the diagnosis of lung related diseases at an initial stage, thereby boosting the likelihood of survival.