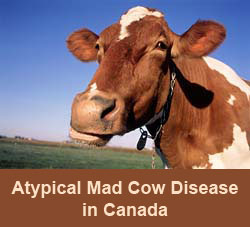 A case of mad cow disease discovered in Canada in December which involves an “atypical” strain of the infection, has now been observed in Europe, Canadian officials said on Wednesday. Canada has noticed the 11th case of bovine spongiform encephalopathy (BSE), providing evidence that multiple strains of the affliction exist around the world, as reported by the Canadian Food Inspection Agency (CFIA).

“Canada’s eleventh case of BSE has been attributed to a less prevalent, atypical strain of BSE which has also been reported in Europe. This is the second case of BSE in Canada that has involved an atypical strain,” the CFIA said.

It was observed that most of the cases of the Atypical BSE were found in cows which were older than 13 years, although in the 12th case of BSE that occurred in February in Alberta, the animal was a six-year-old cow.

“The identification of these atypical strains of BSE is a reflection of an increased global awareness of the potential for multiple strains of the BSE agent to exist, continuous advancements in diagnostic test methods and is a direct result of the enhanced BSE surveillance activities occurring worldwide,” the CFIA said.

The rising cases of the Atypical Mad Cow disease has left the scientists baffled as atypical BSE strains is contagious among animals and in certain cases, the animal does not even have the spongy lesions which is an indication of BSE.