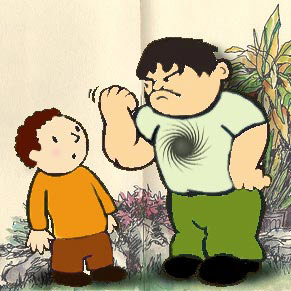 Boys beating each other black and blue, girls involved in cat fights were all that we thought characterised bullying. But there is a psychological bullying that we weren’t aware of that causes severe bruises to one’s mind, ego and self- confidence which is worse than physical beating. This type of bullying has been termed as social bullying characterised by spreading rumors and gossips, by the experts as University of Florida.

Social bullying occurring in adolescence leaves its effects on one’s mind till he/she reach early adulthood leading to depression and anxiety. This was studied by the researchers after surveying 210 college students and is termed as relational victimization. In the survey, undergraduates aged from 18-25 were asked to reveal their experiences in high schools and it was also noted whether having best friends or close friends neutralized the affect of social bullying. This study was particularly done to unearth the relationship between loneliness, depression, anxiety and social bullying, if any.

“About 20 years ago people thought of bullying as very physical. As a result people thought guys did the bullying, and that it wasn’t really a big experience for girls. The problem is that isn’t actually true. There are different types of aggression,” said Eric Storch, Ph.D., an assistant professor of psychiatry in the UF College of Medicine and a co-author of the study. “Boys do tend to be more physical, but both sexes engage in relational victimization. We wanted to see if gender affected strength of the relationship between depressive symptoms and victimization.”

To their surprise, the researchers did not find any difference in the psychological changes caused by social bullying in boys and girls. What was even more surprising a finding for the experts was that positive relationships like having good friends did not help boys and girls overcome the bullying or remain unaffected by it. According to Allison Dempsey, a doctoral student in the UF College of Education and the study’s lead author, in some cases the positive relationships and support help children become more resilient while the rest have more tendencies to take words and abuses to heart.

“I think many people have the belief that victimization is a normal rite of passage in childhood,” Storch said. “While it certainly does happen to most kids, it’s not acceptable. And while I think it would be difficult to completely curtail it, by reducing it you’re going to help someone a tremendous amount to not have to go to school and be plagued by this environment of being tortured day in and day out. This isn’t a normative experience and we need to do something about it and recognize that not doing something could affect children who are really rising stars.”

The study now aims to help researchers and psychologists around the world to design a program that can prevent social bullying in schools. There are already many prevention and intervention programmes especially to identify and stop relational victimization in schools, which according to Dempsey is very hard to do. “If a child tries to punch someone or kick someone, there’s evidence of that happening, there’s a definite aggressor and a definite victim. When it comes to spreading rumors and gossiping, that’s a lot more difficult to prove who’s doing it. And it’s harder to provide consequences,” said Dempsey.

According to Wendy Troop-Gordon, Ph.D., an assistant professor of psychology at North Dakota State University, who is not affiliated with the study, studying the relationship between past experiences and depression and anxiety in adulthood is very important for further research in this field. Turning 18 cannot be a magical age when everyone leaves their past experiences behind, people do carry the experiences with them, said Troop.