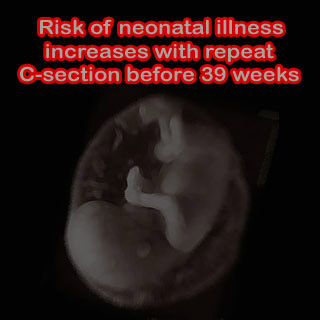 Those women, having elective repeat cesarean section at 37 weeks gestation, are said to be more prone to produce babies having grave health issue.

The study researchers studied those women who had elective repeat cesarean section at the various centers of the Eunice Kennedy Shriver National Institute of Child Health and Human Development (NICHD) Maternal-Fetal Medicine Units Network. These women were chosen from the Cesarean Section Registry of the above mentioned network.

This study was conducted by the University of Alabama at Birmingham researchers. Lead author, T.N. Tita, MD, Ph.D., assistant professor, UAB Deparment of Obstrtrics and Gynecology Division of Maternal-Fetal Medicine, says that, “The cesarean rate in the United States has risen dramatically, from 20.7 percent in 1996 to 31.1 percent in 2006. A major reason is the decline in attempted vaginal births after cesarean. Because elective cesareans can be scheduled to accommodate patient and physician convenience, there is a risk that they may be performed earlier than is appropriate.”

He further says that, “We knew from previous small studies that infants born before 39 weeks gestation are at increased risk for respiratory distress. Because nearly 40 percent of the cesareans performed in the United States each year are repeat procedures, we undertook this large study to describe the timing of elective repeat cesareans and assess its relationship with the risk of various adverse neonatal outcomes.”

From the accumulated data, the researchers determined that if a baby was born at 37 weeks, at a later stage it mostly suffered from any disease or disorder or maybe even died. The results revealed were very astounding. Out of more than 13,000 women, who had undergone elective repeat cesarean sections, an estimated 35 percent of them gave birth within 39 weeks. It’s also stated that infants born at 37 weeks had a two fold risk of developing various health complications, as compared to the babies born at 38 weeks who were one and a half times likely of acquiring a disease.

Tita says that early deliveries may be the cause of an increase in neonatal morbidity and NICU admissions. The study authors suggest that an effort to be made to postpone elective cesarean section till 39 weeks gestation. They also state that women should be adequately counseled and informed of the various health complications that may be avoided with delayed deliveries.