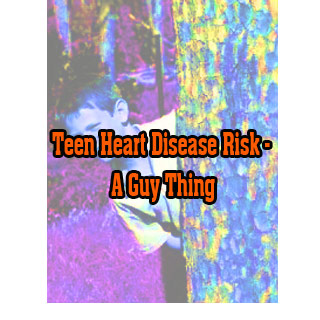 A finding has stunned researchers at the University of Minnesota Children’s Hospital in Minneapolis. A study by the experts at the university suggests that boys are at a greater risk of heart disease due to natural changes occurring in them during their teens.

Health records of over 500 school children in Minneapolis, Minnesota, from the ages of 11 to 19 were followed by the scientists. The study showed that the risk factors causing heart disease differed in boys and girls.

The findings show that Triglyceride, a fat that is found in blood, rose in levels in males and decreased in females. Also the high-density lipoprotein (good cholesterol in our body) decreased in males and increased in females and the systolic blood pressure (the first number of the blood-pressure reading, which measures when the heart contracts) increased more in males than in girls. It was also noted that boys became more insulin-resistant as compared to girls.

“By age 19, the boys were at greater cardiovascular risk. This is particularly surprising because we usually think of body fat as associated with cardiovascular risk, and the increasing risk in boys happened at the time in normal development when they were gaining muscle mass and losing fat,” said Antoinette Moran, M. D., lead author of the study and professor and division chief of pediatric endocrinology and diabetes at the University of Minnesota Children’s Hospital in Minneapolis.

The research also reveals that while girls gained a cardiovascular protection as they reached their puberty, boys became more vulnerable to the cardiovascular diseases. When boys reach a stage of adulthood they are more prone to heart diseases because of factors like physical inactivity, obesity, smoking, raised cholesterol levels, high blood pressure and insulin-resistance – a pre-diabetic condition in which the body can’t use insulin effectively. For boys who unlike girls don’t have cardiovascular protection as an advantage, these factors become a major cause of worry.

There are two factors that did not differ in the both the genders – total cholesterol and low-density lipoprotein (LDL or ‘bad’) cholesterol.

However, a factor, which threatens the health of the heart of both boys and girls, is obesity. And this is one factor that girls need to take care of as their proportion of body fat goes on increasing with the increase in age. “Obesity trumps all of the other factors and erases any gender-protective effect. Obese boys and girls and men and women all have higher cardiovascular risk,” Moran said.

Experts are planning to conduct a further study to understand the cardiovascular protection during adolescence in depth and in a better way. “That the protection associated with female gender starts young is fascinating and something that we don’t understand very well. That this protection emerges during puberty and disappears after menopause suggests that sex hormones give women a protective advantage. There’s still a lot that needs to be sorted out in future studies – estrogen may be protective or testosterone may be harmful,” Moran said. This subject needs more research also because it is simple physiology and not linked with lifestyle patterns.

The study is published in Circulation: Journal of the American Heart Association.

Mental problems like depression caused due to excess mobile use