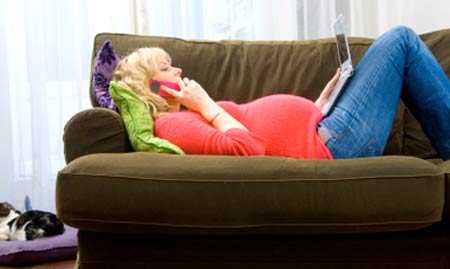 The cellphone–radiation link seems to have surfaced out again after lying low in the shadows for quite some time. According to professionals from the Yale University, radiation exposure during pregnancy may lead to behavioral disorders in the child.

In the research, a set of mice was exposed to radiation by means of an activated cell phone located on the upper portion of the cage. On the contrary, a deactivated device was used for the control group of mice.

Senior author Dr. Hugh S. Taylor, professor and chief of the Division of Reproductive Endocrinology and Infertility in the Department of Obstetrics, Gynecology & Reproductive Sciences, cited, “This is the first experimental evidence that fetal exposure to radiofrequency radiation from cellular telephones does in fact affect adult behavior.”

Further, the team gauged the brain activities of adult mice which experienced radiation as fetuses. The subjects were also conditioned to undergo a range of behavioral and cognitive trials. As per the results, fetuses that received radiation seemed to be hyperactive and carried lower mental abilities as adult mice. One reason for this, the scientists speculated could be the effect of radiation on the prefrontal cortex of the brain.

Though the trial settings replicated the effects of clinical trials, further research is required to comprehend the exact level of radiation exposure. The researchers intend to use standard electromagnetic field generators to develop more precise outcomes.

The findings are published in the journal, Scientific Reports.