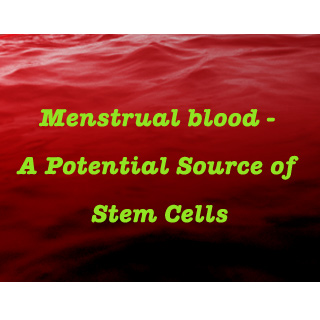 The menstrual cycle of women could prove to be of greater scientific usage. According to a newly conducted research, the menstrual blood would be of higher usage as it is indefinite in nature and can actually be used or collected. The findings show that the menstrual blood is an important medium of multi-potential stem cells with the intention for using it in regenerative medicine.

The endometrial tissue of the uterus contains stromal stem cells which are there in the connective tissues. Every time the fresh growth of tissues and blood vessels is discarded during the menstrual cycle, there are some cells that have the regenerative capabilities. But the collection of the MenSCs from the tissue would be invasive.

It has been evident through the study that menstrual blood stromal cells (MenSCs) have the tendency to differentiate into adipogenic, chondrogenic, osteogenic, ectodermal, mesodermal, cardiogenic and neural cell lineages. The sample MenSCs expanded quickly and continued more than 50 percent of their telomerase activity, as compared to human embryonic stem cells and showed greater activity than bone marrow-derived stem cells.

Dr. Amit N. Patel, Director of Cardiac Cell Therapy at the University of Pittsburgh’s McGowan Institute of Regenerative Medicine, who led the study, said, “It has been verified through the study that MenSCs have a tendency to expand easily to clinical relevance and states multipotent markers at molecular and cellular level.”

Julie G. Allickson, Ph.D., Vice President of Laboratory Operations and Research and Development, Cryo-Cell International, Inc. , was also involved in the findings, who said, “The ideal cell would also have the ability to be used in an allogenic manner from donors for optimal immunogenic compatibility. Due to their ease of collection and isolation, MenSCs would be a great source of multipotent cells if they exhibit this property along with their ability to differentiate.”

Allickson further continued that the encouraging preliminary results support the significance of further study of these cells in a number of different spheres such as heart disease, diabetes and neurodegenerative disease.

The latest study appears in the recent issue of Cell Transplantation (Volume 17, issue 3).