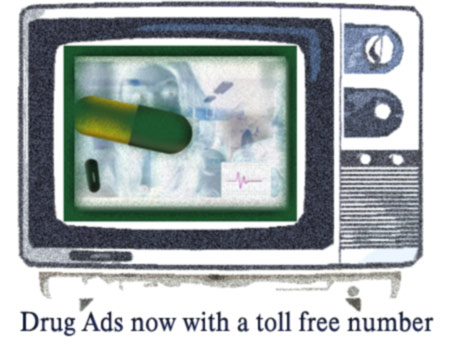 There is good news for those viewers who consume drugs and other medicines just by watching television advertisements. There would now be a toll-free number for direct-to-customers, suggested a U.S. Food and Drug Administration panel on 16th May 2008.

The panel compromises of medical experts which were called from outside who discussed about the benefits, such as providing a toll-free number would result into prevention of misuse of drugs. But this meeting was not called for any further recommendations to the FDA. Christine M. Bruhn, a consumer food marketing specialist at the University of California said, “I think if anything, it’s going to increase sensitivities to risk,” and even said that FDA prefers to use the number 1-800-SIDE EFT.

This idea of a toll-free number would be useful in spreading awareness and would provide a correct guidance to the consumers regarding the intake of the drugs and also explains its negative effects. All these points have been suggested by the Congress to the FDA. To know more about the toll-free number facility practically, the agency wants to study the effect of this facility, which would take atleast two years. But there were few who question the reason behind the prolonged duration behind conducting the study.

The cholesterol drug Vytorin has got widespread promotion and Merck and Schering-Plough were disparaged by not showing up the drug’s effectiveness. And in the case of an anti-cholesterol drug Dr.Robert Jarvik, who was not a practicing as a medical doctor, was a part of the advertisement in promoting the product. Here Pfizer had been criticized.

In the year 1997 the rules and regulations were altered and softened a bit on TV and radio ads which made the drug makers advertise it in a shorter form for the side effects of the drugs in its commercials. After that, a $14 billion revenue was spent by the pharmaceuticals on broadcast and cable TV ads for the prescription drugs. The current advertisements by Merck & Co. (MRK) and Schering-Plough Corp. (SGP), which is a joint venture and Pfizer Inc. (PFE), have been into the news for the recent ad campaigns.

There should be a ticker running on the bottom of the television screen, suggests Linda Neuhauser, a professor of clinical health at the University of California, Berkeley.