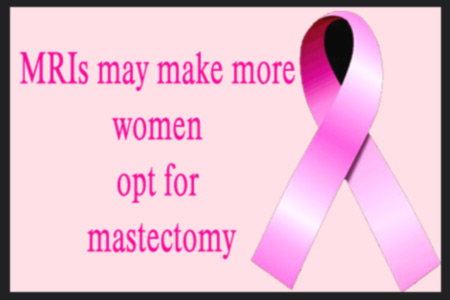 The Mayo Clinic has reported that there is an increased rate in the number of mastectomies in women suffering with breast cancer. According to the findings, which are to be presented on May 31 at the American Society of Clinical Oncology (ASCO) annual meeting, in Chicago patients are receiving more of magnetic resonance imaging (MRI) prior to the surgery.

The study was held on 5,414 women who underwent surgery at the initial stage of breast cancer at Mayo Clinic between 1997 and 2006.

Dr Rajini Katipamula, study’s lead author and a senior clinical fellow in hematology/oncology said, “We found that if a woman undergoes an MRI before surgery, she is about 10 percent to 15 percent more likely to have a mastectomy, compared to women who did not undergo MRI.”

Dr Matthew Goetz, study’s senior author and assistant professor of oncology at Mayo Clinic said, “Our study is the largest to examine the association between MRI and mastectomy rates at a single institution and may reflect national trends.”
“What we don’t know from this study is whether the higher rate of mastectomy observed in our patients undergoing MRI is related to the detection of additional disease, or whether the uncertainty raised by MRI leads to greater anxiety for the patient and physician, thus leading patients and physicians to choose mastectomy over lumpectomy,” he said.

According to Goetz, MRI was linked with higher mastectomy rates but the increasing rate was mostly seen in women who did not undergo MRI process. He also said that other factors in the decision making process played a vital role for patients and physicians.

Dr Amy Degnim, a breast surgeon at Mayo Clinic and an assistant professor of surgery, also the co-author of the study said, “Although MRI was associated with a higher mastectomy rate, we cannot assume it is a cause-and-effect relationship.”

“More investigation at an individual level is needed to understand better how MRI may impact personal choices for breast cancer surgery,” she added.

Dr. Richard J. Bleicher, co-director of the Breast Fellowship Program at Fox Chase Cancer Center in Philadelphia, confirmed this. “This is a real finding. This is not something that is isolated to Mayo. We see the same thing,” he said.

The conclusions would be presented on May 31 at the 44th Annual Meeting of the American Society of Clinical Oncology (ASCO).

A1CNow SELFCHECK unit may aid in home-monitoring of A1C level