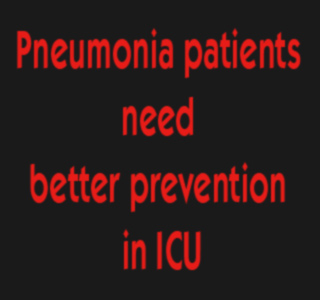 Researchers from the Mayo Clinic have discovered that in a comparison between multidisciplinary medical centers such as theirs and the average VAP-risk rate for 211 hospitals in the National Healthcare Safety Network (NHSN), the rate with which patients are developing ventilator-associated pneumonia (VAP) is more or less similar. Patients would be happy with this news as it recommends that care levels are usually seen in the U.S in intensive care units where the sickest patients, mainly the elderly people, get treatments.

The study proves to be useful as it has pointed out that the risk involved for VAP-patients who are kept in trauma intensive care unit (TICU), is lower at Mayo Clinic as compared to the NHSN average.

The detail of the findings is where the U.S. Centers for Disease Prevention and Control (CDC) aimed when it made the NHSN data available in a June 2007 report. The report contains findings revealed by CDC analysts who instructed the hospitals to utilize the information which would guide local prevention strategies and rest of the quality improvement efforts focusing at reducing infection rates.

The findings were recently presented by the Mayo group at the American Thoracic Society’s 2008 International Conference in Toronto. The information reported revealed that for trauma patients, the Mayo Clinic has a risk level which comes up to around 3.4 per 1,000 days of mechanical ventilation, for VAP in intensive care units (ICU), while compared with the VAP average of 10.2 per 1,000 days in trauma ICUs participating in the NHSN.

The cause for this difference is unknown and the dissimilarity needs to be validated via further studies. But these initial results points out the scope for improvement to lower the 10.2 risk rate.

“The topic is an important one to study because developing VAP is a potential risk for all critically-ill patients who must be on an invasive mechanical ventilator greater than 48 hours,” says Mayo lead author Ahmed Mahmoud, M.B.B.S.

“As the demographics of this country change, the number of frail elderly who end up hospitalized and needing ventilation in a TICU is likely to increase,” adds senior author Bekele Afessa, M.D., of Mayo’s pulmonary and critical care medicine group. “We want to do our best to eliminate the potential for any additional disease burden to patients. Understanding the risk of VAP in all ICU settings is a step toward that.”

Mayo is the first and only centre that has compared the VAP-risk rates at NHSN hospitals to its’ practice as a single advanced medical center along with intensive care units and a approach towards infection control. 206 patients were who were treated at the clinic’s ICU’s between February and August 2007, were analyzed by the Mayo Clinic researchers.