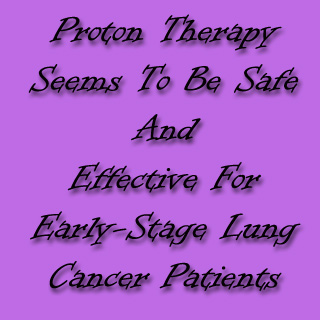 In accordance to the American Cancer Society, lung cancer is the number one cause of cancer death among both men and women. Though early-stage lung cancer may be usually treated with surgery, patients with inoperable lung cancer are subjected to a radiation therapy. Japanese scientists assert that proton beam therapy is not only safe and effective, but also superior to other conventional treatments for Stage I inoperable non-small cell lung cancer (NSCLC) patients.

Hidetsugu Nakayama, M.D., Ph.D., lead author of the study and a physician at the Proton Medical Research Center in Tennoudai, Tsukuba, Ikbaraki, Japan, added, “Proton beam therapy is safe and effective, if not superior to other nonsurgical modalities, for treating patients with inoperable Stage I NSCLC. The randomized clinical trial that compares proton beam therapy with stereotactic body radiotherapy is needed to clarify survival benefit.”